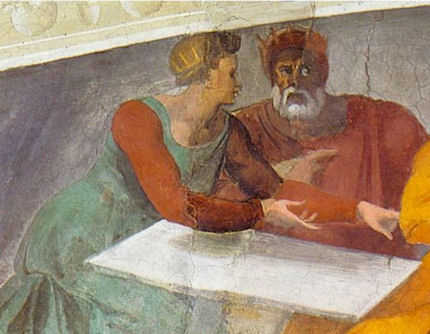 The Controversial Restoration of Michelangelo’s Sistine Chapel Ceiling  No single proof of a restoration-induced injury to a work of art could be clearer than the photograph shown here (Fig. 1) of a section of Michelangelo’s Sistine Chapel ceiling frescoes. It was taken after the last restoration and shows in its centre section a repair made in 1566 by the painter Domenico Carnevale when a section of Michelangelo’s fresco fell away during settlement of the building (see Fig. 2 diagram).   Carnevale had re-plastered the loss and, while the plaster surface was still wet, faithfully painted it to match Michelangelo’s (then) surrounding colours and tones.   The repair was a good one and for centuries it remained almost invisible (see Figs….