Did You Know This About Leonardo da Vinci? 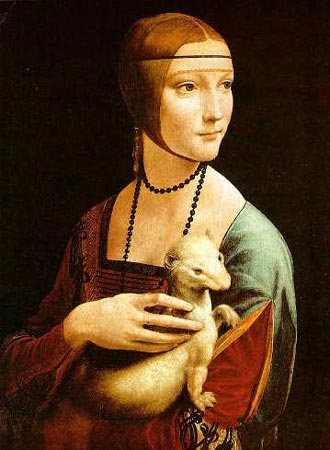 I had great fun working my way through the book Da Vinci for Dummies (Buy Direct) and thought I’d share some of the intriguing things I’d learned about him. The kind of things that come up in trivia quizzes or to drop into conservations at a dinner table.

Leonardo da Vinci Fact No 1: Not a Prolific Painter
Leonardo left fewer than 30 paintings, and these aren’t even all finished. But before you think you can do the same and still go down in art history, remember he also left hundreds of drawings, sketches, and pages of notes. His reputation isn’t just based on his paintings.

Leonardo da Vinci Fact No 2: His Own Worst Enemy
Leonardo was both a perfectionist and a procrastinator. How’s that for a terrible combination of personality traits? It’s said to be one of the reasons why he left so few paintings.

Leonardo da Vinci Fact No 3: Where’s the Sculpture?
There are no pieces of sculpture that can definitely be attributed to Leonardo, even though art historians know he learned sculpture when an art apprentice in Verrocchio’s studio. (So remember to sign your work!)

Leonardo da Vinci Fact No 4: If He Hadn’t Been Illegitimate, He May Not Have Been an Artist
Leonardo was born out of wedlock on 15 April 1452. But if he hadn’t been, he might not have been apprenticed to the artist Andrea del Verrocchio, as he would have more occupations open to him. As it was, being illegitimate, his options were limited. The only thing known for sure about his mother is that her name was Caterina; art historians believe she probably worked in the household of Leonardo’s father, Ser Piero da Vinci.

Leonardo da Vinci Fact No 5: Expensive Paper Makes for Messy Notebooks
Paper was far more expensive and harder to get hold of in Leonardo’s day than it is today. Which is why he made more intensive use of it, “filling” most of every page.

Leonardo da Vinci Fact No 6: A Vegetarian
Unusually for the era in which he lived, Leonardo was a vegetarian, for humanitarian reasons. (Not that this stopped him from dissecting humans to study anatomy and to map out where the human soul was, nor from taking a job as a designer of military weapons at one stage.)

Leonardo da Vinci Fact No 7: One of the First Italians to Use Oil Paint
Leonardo was one of the first artists in Italy to use oil paints instead of egg tempera, enjoying the freedom it gave him to rework a painting. He even concocted his own recipe for oil paints.

Leonardo da Vinci Fact No 8: Lover of Experimenting
Leonardo’s great fresco, The Last Supper began to deteriorate almost immediately. This is because Leonardo didn’t follow traditional, tried-and-tested fresco techniques of water-based paints applied to wet plaster, but used oil-based paint on a surface that was a mixture of gesso, pitch, and mastic.

Leonardo da Vinci Fact No 9: What He Didn’t Invent
Leonardo invented, or drew up plans and sketches for a great number of things. But the telescope wasn’t one of them. Nor gears, ratchets, pulley systems, or screws; these already existed.

Leonardo da Vinci Fact No 10: Don’t Call Him Da Vinci
Despite the title of Dan Brown’s best-selling who-done-it, The Da Vinci Code, if you must shorten his name, call him Leonardo. Da Vinci just means “from the town of Vinci”.