Drawings believed to be those that Adolf Hitler submitted in a failed attempt to gain entry into the Vienna Academy of Art are to be auctioned. 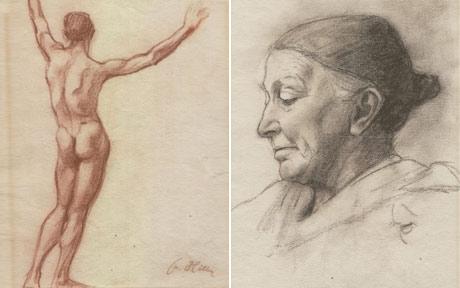 Sketches taken from the portfolio submitted by a young Adolf Hitler to the Vienna academy of Art Photo: BNPS

And a distinguished emeritus dean of art has studied them and said that today they would be considered only up to “moderate GCSE standard.”

Some have speculated that Hitler’s rejection from art college helped shape his character in later years.

He believed that it was a Jewish professor who had rejected his application to study at the academy.

The works consist of nudes, human figures, various objects and landscapes including buildings.

Most are dated 1908 – the year he was rejected by the academy for the second time and was not even permitted to sit the exam – and some are dated a year later that were added to his portfolio.

Hitler moved to Vienna as a young man in 1905 and lived a bohemian life, making small amounts of money by selling pictures he copied from postcards.

At one point he ended up in a hostel for the homeless and later he claimed it was in Vienna where the fires of his anti-Semitism were ignited.

Michael Liversidge, Emeritus Dean of Arts at Bristol University, where he has taught art history since 1970 and was head of department for 21 years, has studied the pictures.

He said: “Of course, remembering the Hitler diaries which turned out to be turkeys, one has to be careful though these do look authentic and presumably have been checked out as to their provenance.

“They look quite typical of an aspiring student hoping to get into art school – tentative and not very certain about his perspective when he’s using pencil and pen, making basic errors by getting the top and the bottom of a candlestick wrong in relation to each other and so on.

“And he doesn’t yet have much in the way of technical skill, but it’s not so bad that one can’t imagine him learning – especially when he’s bolder with the charcoal or black chalk.

“But there’s no latent genius here, and not much beyond a moderate GCSE. Probably if the artist was at school today you wouldn’t encourage him to keep the subject up at A Level.

“So if they are part of a portfolio submitted with an application to study at a major European art academy, the selectors were right to reject him – they just don’t suggest he was more than pretty marginal and mediocre for a potential art school entrant then or now.

“If they are what he sent in he definitely wouldn’t have been worth interviewing for a place.

“Now, of course, they have an altogether different historical interest for us, but sadly that isn’t one that has anything to do with art.”

Richard Westwood-Brookes, who is selling the archive, said: “We know Hitler was twice turned down by the Vienna Academy of Art.

“The second time in 1908 he wasn’t even invited to take the exam. These works make up a collection that he would have submitted.

“They are the type of pictures that a student would produce to show a range of techniques.

“Of course it is possible that Hitler’s rejection from the Vienna Academy of Art was something that helped shape his character and turn him into the monster he became.

“It’s the first time the pictures have come to light and can be seen by the general public.

“The vendor is an artist based on the continent and has had them for many, many years.”