Is the Olokun Head the real thing?

A “copy” of one of the greatest African sculptures may be genuine, researchers believe 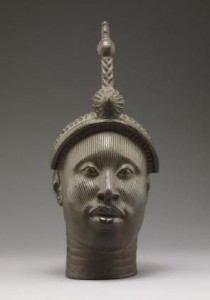 A copy or the real thing? The Olokun Head

The Olokun Head, exhibited as a copy of one of the greatest and most mysterious African works of art, is to be investigated at the British Museum after the closure of its current Ife show. Scholars consider that Nigerian Ife bronzes are only exceeded in quality by works made later in neighbouring Benin.

The original of the Olokun Head has been assumed to be lost since 1948; the modern replica is currently on display in London until 6 June. “Kingdom of Ife” and the head will tour later in the year to the US (Museum of Fine Arts, Houston, in September; the Virginia Museum of Fine Arts in February 2011; the Indianapolis Museum of Art in July 2011; and New York’s Museum for African Art in November 2011).

On its discovery, exactly a century ago, the life-size Olokun Head was considered too great a masterpiece to have been created by African hands, a reflection of attitudes at the time. Some European scholars even believed it to be evidence of the lost civilisation of Atlantis. It was not subjected to detailed study until 1948, when it left Nigeria for the first time, for an exhibition at the British Museum. Following scientific research, it was concluded that the head was not the original, but a replica which had been made to surreptitiously replace it, with the original sold to a foreign collector.

The story began in 1910, when German anthropologist Leo Frobenius heard about an ancient sculpted head that had been buried in a sacred palm grove just outside the city of Ife. The shrine was dedicated to Olokun, goddess of the sea.

In his book The Voice of Africa, Frobenius recounts how one night he organised the digging up of the head, paying the guardian of the site £6 and a bottle of whisky. It is believed that the bronze head, which was probably made around 1400, depicts an ancient Ooni (king).

Some days later, the British colonial administration intervened and seized the head, on the grounds that it was sacred and should be returned to the grove. There it apparently remained until 1934, when it was taken to the palace of the Ooni for safekeeping. Four years later the Ooni transferred the bronze to the newly established Ife Museum.

In 1948, when the Olokun Head travelled to the British Museum, it was examined by specialists Leon Underwood and William Fagg, who declared it to be a replica, mainly because of the casting technique.

They believed the head sent to London was produced by a modern sand-casting technique (from a plaster mould), not by the traditional lost-wax process. There was apparently evidence of two seam marks and the surface appeared not to have been chased, although Frobenius had recorded that it had been.

An analysis of the metal content (zinc-copper, with traces of lead) showed that it was identical to an authentic Ife head in the British Museum. However, Underwood and Fagg argued that the faker must have melted down damaged ancient sculptures, to obtain the correct alloy. Frank Willett, the greatest specialist on Ife art, later concurred that it was a modern replica—and it has always been exhibited as such.

What then happened to the original? One theory is that when Frobenius had to relinquish the head in 1910, he commissioned a replica and smuggled out the original, although time to create the technically complex copy would have been very short.

Another possibility is that the replica was created at some point between 1910 and 1934, while it remained buried in the Olokun shrine (or between 1934 and 1938, when it was at the Ooni’s palace), to sell to a European or North American collector. But African art was then relatively cheap (even Benin bronzes, which can now go for millions of pounds, usually sold for under £100 until the 1950s), and creating the replica would have been expensive. If the original did go to a serious collector before 1938, it is surprising that it has never re-emerged.

Until now specialists have accepted that the Olokun Head from the Ife Museum is a replica, but a new theory is about to be tested: could the object be the original, dating from around 1400? If so, it might overturn our knowledge about early bronze casting in Africa.

West African art specialist Nigel Barley, a former British Museum curator, briefly examined the Olokun Head in January, and says that he now believes it may well be the original. He told The Art Newspaper: “It didn’t ring alarm bells shouting out that this is a fake. It also seems curious that someone went to so much trouble to create a replica, rather than just stealing it.”

Enid Schildkrout, an expert at New York’s Museum for African Art and curator of the current exhibition, concurs. She points out that if the object on show is a replica, then “it is surprising that the original has never reappeared”.

How the head will be tested

When “Kingdom of Ife” closes on 6 June, the Olokun Head will be tested at the British Museum, with the consent of its owner, Nigeria’s National Commission for Museums and Monuments. This will include x-ray fluorescence, which involves aiming a beam at the metal. By studying the emitted rays, it should be possible to determine the precise metal content.

The interior of the hollow head will be examined microscopically, to search for tiny traces of residues from the mould left during casting. This could tell us about the casting process, and it might even be possible to date samples of material with thermo-luminescence testing.

The outer surface will be examined to see whether modern tools or abrasives have been used. An analysis of corrosion could also make it possible to determine whether the head had at some point been buried underground.