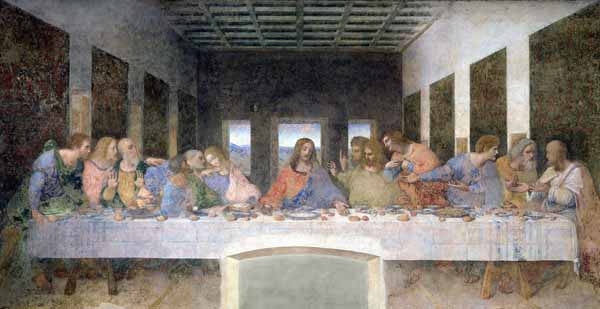 The Last Supper measures 450 × 870 centimeters (15 feet × 29 ft) and covers the back wall of the dining hall at the monastery of Santa Maria delle Grazie in Milan, Italy. The theme was a traditional one for refectories, although the room was not a refectory at the time that Leonardo painted it. The main church building had only recently been completed (in 1497), but was remodeled by Bramante, hired by Ludovico Sforza to build a Sforza family mausoleum. The painting was commissioned by Sforza to be the centerpiece of the mausoleum. The lunettes above the main painting, formed by the triple arched ceiling of the refectory, are painted with Sforza coats-of-arms. The opposite wall of the refectory is covered by the Crucifixion fresco by Giovanni Donato da Montorfano, to which Leonardo added figures of the Sforza family in tempera. (These figures have deteriorated in much the same way as has The Last Supper.) Leonardo began work on The Last Supper in 1495 and completed it in 1498—he did not work on the painting continuously. This beginning date is not certain, as “the archives of the convent have been destroyed and our meagre documents date from 1497 when the painting was nearly finished.”

The Last Supper specifically portrays the reaction given by each apostle when Jesus said one of them would betray him. All twelve apostles have different reactions to the news, with various degrees of anger and shock.

From left to right: Bartholomew, James, son of Alphaeus and Andrew form a group of three, all are surprised.

Judas Iscariot, Peter and John form another group of three. Judas is wearing green and blue and is in shadow, looking rather withdrawn and taken aback by the sudden revelation of his plan. He is clutching a small bag, perhaps signifying the silver given to him as payment to betray Jesus, or perhaps a reference to his role within the 12 disciples as treasurer. He is the only person to have his elbow on the table. Peter looks angry and is holding a knife pointed away from Christ, perhaps foreshadowing his violent reaction in Gethsemane during Jesus’ arrest. The youngest apostle, John, appears to swoon.
Jesus, Apostle Thomas, James the Greater and Philip are the next group of three. Thomas is clearly upset; James the Greater looks stunned, with his arms in the air. Meanwhile, Philip appears to be requesting some explanation.

In the 19th century, a manuscript (The Notebooks Leonardo Da Vinci pg. 232) was found with their names; before this only Judas, Peter, John and Jesus were positively identified.

In common with other depictions of The Last Supper from this period, Leonardo seats the diners on one side of the table, so that none of them have their backs to the viewer. Most previous depictions excluded Judas by placing him alone on the opposite side of the table from the other eleven disciples and Jesus or placing halos around all the disciples except Judas. Leonardo instead has Judas lean back into shadow. Jesus is predicting that his betrayer will take the bread at the same time he does to Saints Thomas and James to his left, who react in horror as Jesus points with his left hand to a piece of bread before them. Distracted by the conversation between John and Peter, Judas reaches for a different piece of bread not noticing Jesus too stretching out with his right hand towards it. (Matthew 26: 17-46). The angles and lighting draw attention to Jesus, whose head is located at the vanishing point for all perspective lines.
The painting contains several references to the number 3, which represents the Christian belief in the Holy Trinity. The Apostles are seated in groupings of three; there are three windows behind Jesus; and the shape of Jesus’ figure resembles a triangle. There may have been other references that have since been lost as the painting deteriorated.