Naked Mans and Nuns Riles Some (but not all) Catholics

When life and art collide … 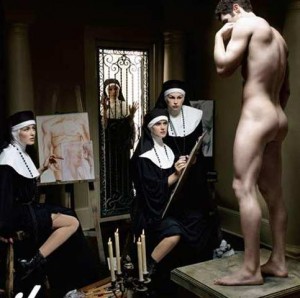 A fitness club ad running in Boston magazine that depicts nuns sketching a naked man has triggered protests among some members of the Bay State’s Catholic community.

The ad for the Equinox Fitness Club is running in this month’s issue and some Catholic organizations blasted the photo saying it was offensive.

C.J. Doyle of the Catholic Action League of Massachusetts said the ad shows contempt for the Catholic religion.

“It says a great deal about this perverse obsession in both the fashion industry and the advertising industry of exploiting and mocking and sexualizing Catholic religious imagery,” Doyle said.

That’s the Catholic Action League for you … no sense of humor.

Actual nuns have a different opinion.

“It is crass, but there are a lot of crass things that I don’t pay attention to. I don’t need to,” said Sister Martha Moss.”We work in the media all the time and we know that these things come and go and the best thing is to let them go,” said Sister Kathryn Hermes.

Meanwhile, the naked man is standing in classical Grecian discus-thrower pose. What could be more traditional, staid, and, well, classical?