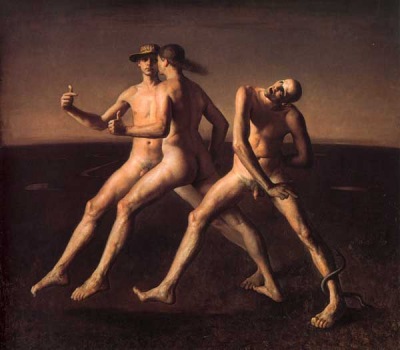 OTHER PAINTING METHODS of ODD Nerdrum
He started with a rough outline of the head and went straight to painting shadows, no hard edges in the beginning. During a break on the first day, he used a fan brush to soften the entire face. He turned the painting upside down a couple of times to see where the problem lies. At the beginning of the second day, before starting to paint, he applied a thin layer of linseed oil on the whole surface with the rag (oiling out) he then added green umber to the rag and applied that on the background. (no extra oil, except for the little bit of leftover oil of rag) in the same manner, he applied gold ochre (?) on the whole head, brown on the neck, black on the hair and all over the chin/mouth area.?That’s the only glazing he did. The rest of the time, he painted direct.

***
SOME OTHER THINGS NERDRUM TALKED ABOUT (paraphrasing, so please don’t treat them as quotes):
Really good masters can create light even in the shadows.
Monet understands grey.
A lot of the “modern Monets” who copied him failed because they used all these strong colors that clash with each other.
A sky with all blues can look greyer than one that’s painted in black and grays. In the old days, painters didn’t use blue much even for sky because the pigment was so expensive. So they had to learn to make “optical blue” .
A masterpiece should work well in both large and small, and when viewed from left and right.
Light always changes. Do the best with the change but don’t fix something that’s not broken.
[when critiquing a still life painting of fruits…] lemons deserve the same respect as human beings (then he quickly said “…maybe I am going too far”). you need to go deeper.
Old masters all had their little faults, beware when you are learning from them. For example, Rembrandt had horrible proportions, Caravaggio was a horrible colorist. Titian painted very badly until he was old. Everybody painted their own mouths. Rembrandt always painted himself even when he was painting other people. Bonnard is not “correct” but he is great because he is a crazy guy.
Andrew Wyeth reinvented reality…he was one of the best painters in America.
I have no respect for people who wants to drag down the human body…it’s important to give people dignity…how? choose a few people you like, care for them, have empathy for them.
All masterpieces are built on trying to emulate someone you admire.
When asked if there are living painters that he likes, he said there are a lot, but he didn’t give names.
It’s important for some representational painters to be famous because they would have some say in the art world.