Painting not a Caravaggio: Vatican 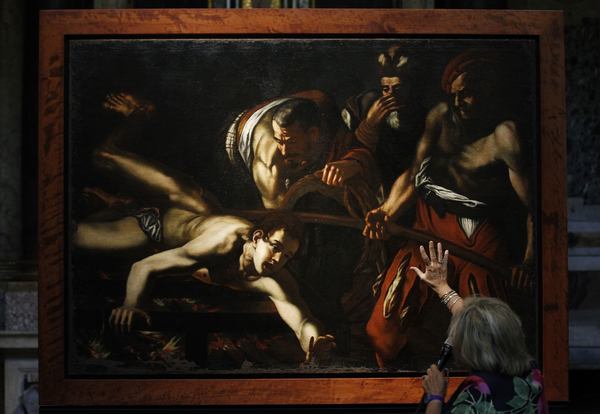 Rosella Vodret of Rome’s Museums Authority speaks about the “Martyrdom of St. Lawrence” in Rome

The Vatican’s top art historian has shot down a report in its own newspaper that suggested a recently discovered painting was a Caravaggio.

The head of the Vatican Museums, Antonio Paolucci, wrote in the Vatican newspaper L’Osservatore Romano that the work was most likely a copy of an original by a Caravaggio-influenced artist.

L’Osservatore set the art world aflutter last week with a front-page article headlined A New Caravaggio detailing the artistry behind the Martyrdom of St. Lawrence, which had been discovered in the sacristy of a Jesuit church in Rome.

The author of the article, art historian Lydia Salviucci Insolera, had made clear that she was not making any conclusions about the authenticity of the work and that more diagnostic tests were required.

But the impression given by the newspaper was that the painting was indeed a never-before-seen Caravaggio: The definitive-sounding headline appeared alongside a colour photograph of the dramatic painting – on the 400th anniversary to the day of the master’s death.

The original Caravaggio article published on June 18 pointed out that the The Martyrdom of St. Lawrence presented features typical of the artist’s style, such as the use of chiaroscuro for dramatic effect and the unique perspective from which the subject is seen. The report also highlighted similarities with other Caravaggio’s paintings, for example in the saint’s hand and body movement.

But on Monday Paolucci wrote that the work was not of Caravaggio’s quality and termed it “modest” at best, pointing out in particular that the hands were completely out of perspective.

The painting depicts a semi-naked young man, his mouth open in desperation, one arm stretched out as he leans over amid flames. St. Lawrence was burned to death in 258.

Paolucci said that while the idea of putting St. Lawrence on the grill where he became a martyr was dramatically beautiful, and the thugs perpetrating his martyrdom are suggestive of Caravaggio’s themes, a closer look reveals stylistic shortcomings.

He said that the hands are “wrong in their perspective” and the subjects’ anatomies were “awkward”. He also noted that the painting technique was “inadequate”.

“The quality isn’t there, whereas in a Caravaggio it always is, and it’s high even when … he uses maximum carelessness and a minimum of his expressive resources,” Paolucci wrote.

He stressed that he wasn’t criticising Insolera and noted that she had correctly made clear that further analysis and documentation would be required to provide definitive answers as to whether the work was a Caravaggio.

The painting is to be unveiled to the public on Tuesday by Italy’s Culture Ministry.

Caravaggio died in the Tuscan coast town of Porto Ercole in 1610 at age 39 under mysterious circumstances. He had been hugely influential and famous, but had also led a dissolute life of street brawls and alcohol.

Recently, a team of Italian researchers said they had identified Caravaggio’s remains after a year of digging up bones in Porto Ercole and conducting carbon dating, DNA testing and other analysis.

Italy has been marking the anniversary with a variety of events, and an exhibit in Rome earlier this year drew more than half a million visitors.