A dandy (also known as a beau and gallant) is a man who places particular importance upon physical appearance, refined language, and leisurely hobbies, pursued with the appearance of nonchalance in a cult of Self. Historically, especially in late 18th- and early 19th-century Britain, a dandy, who was self-made, often strove to imitate an aristocratic style of life despite coming from a middle-class background. 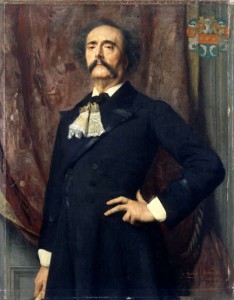 Though previous manifestations, of Alcibiades, and of the petit-maître and the muscadin have been noted by John C. Prevost, the modern practice of dandyism first appeared in the revolutionary 1790s, both in London and in Paris. The dandy cultivated skeptical reserve, yet to such extremes that the novelist George Meredith, himself no dandy, once defined “cynicism” as “intellectual dandyism”; nevertheless, the Scarlet Pimpernel is one of the great dandies of literature. Some took a more benign view; Thomas Carlyle in his book Sartor Resartus, wrote that a dandy was no more than “a clothes-wearing man”. Honoré de Balzac introduced the perfectly worldly and unmoved Henri de Marsay in La fille aux yeux d’or (1835), a part of La Comédie Humaine, who fulfills at first the model of a perfect dandy, until an obsessive love-pursuit unravels him in passionate and murderous jealousy.

Charles Baudelaire, in the later, “metaphysical” phase of dandyism defined the dandy as one who elevatesæsthetics to a living religion, that the dandy’s mere existence reproaches the responsible citizen of the middle class: “Dandyism in certain respects comes close to spirituality and to stoicism” and “These beings have no other status, but that of cultivating the idea of beauty in their own persons, of satisfying their passions, of feeling and thinking …. Contrary to what many thoughtless people seem to believe, dandyism is not even an excessive delight in clothes and material elegance. For the perfect dandy, these things are no more than the symbol of the aristocratic superiority of his mind.”

The linkage of clothing with political protest had become a particularly English characteristic during the 18th century. Given these connotations, dandyism can be seen as a political protestation against the rise of levellingegalitarian principles, often including nostalgic adherence to feudal or pre-industrial values, such as the ideals of “the perfect gentleman” or “the autonomous aristocrat”, though paradoxically, the dandy required an audience, as Susann Schmid observed in examining the “successfully marketed lives” of Oscar Wilde and Lord Byron, who exemplify the dandy’s roles in the public sphere, both as writers and as personae providing sources of gossip and scandal.

Eccentricity defined as taking characteristics, such as dress and appearance, to extremes, began to be applied generally to human behavior in the 1770s; similarly, the word dandy first appears in the late 1700s: In the years immediately preceding the American Revolution, the first verse and chorus of “Yankee Doodle” derided the alleged poverty and rough manners of American-born colonists, suggesting that whereas a fine horse and gold-braided clothing (“mac[c]aroni”) were required to set a European apart from those around him, the average American’s means were so meager that ownership of a mere pony and a few feathers for personal ornamentation would qualify one of them as a “dandy” by comparison to and/or in the minds of his even less sophisticated compatriots. A slightly later Scottish border ballad, circa 1780, also features the word, but probably without all the contextual aspects of its more recent meaning. The original, full form of ‘dandy’ may have been jack-a-dandy. It was a vogue word during the Napoleonic Wars. In that contemporaryslang, a “dandy” was differentiated from a “fop” in that the dandy’s dress was more refined and sober than the fop’s.

In the 21st century, the word dandy is a jocular, often sarcastic adjective meaning “fine” or “great”; when used in the form of a noun, it refers to a well-groomed and well-dressed man, but often to one who is also self-absorbed.

The model dandy in British society was George Bryan “Beau” Brummell (1778–1840), in his early days, an undergraduate student at Oriel College, Oxford and later, an associate of the Prince Regent. Brummell was not from an aristocratic background; indeed, his greatness was “based on nothing at all,” as J.A. Barbey d’Aurevilly observed in 1845. Ever unpowdered, unperfumed, immaculately bathed and shaved, and dressed in a plain dark blue coat, he was always perfectly brushed, perfectly fitted, showing much perfectly starched linen, all freshly laundered, and composed with an elaborately knotted cravat. From the mid 1790s, Beau Brummell was the early incarnation of “the celebrity,” a man chiefly famous for being famous—in his case, as a laconically witty clothes-horse.

By the time Pitt taxed hair powder in 1795 to help pay for the war against France, Brummell had already abandoned wearing a wig, and had his hair cut in the Roman fashion, “à la Brutus”. Moreover, he led the transition from breeches to snugly tailored dark “pantaloons,” which directly led to contemporary trousers, the sartorial mainstay of men’s clothes in the Western world for the past two centuries. In 1799, upon coming of age, Beau Brummell inherited from his father a fortune of thirty thousand pounds, which he spent mostly on costume, gambling, and high living. In 1816 he suffered bankruptcy, the dandy’s stereotyped fate; he fled his creditors to France, quietly dying in 1840, in a lunatic asylum in Caen, just before age 62. 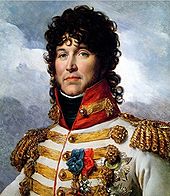 Joachim Murat, the French King of Naples, was dubbed the "Dandy King" because of his flawless appearance.

Another prominent dandy of the period was Alfred Guillaume Gabriel d’Orsay, the Count d’Orsay, who had been friends with Byron and who moved in the highest social circles of London.

By the mid-19th century, the English dandy, within the muted palette of male fashion, exhibited minute refinements — “The quality of the fine woollen cloth, the slope of a pocket flap or coat revers, exactly the right colour for the gloves, the correct amount of shine on boots and shoes, and so on. It was an image of a well-dressed man who, while taking infinite pains about his appearance, affected indifference to it. This refined dandyism continued to be regarded as an essential strand of male Englishness.”

The beginnings of dandyism in France were bound up with the politics of the French revolution; the initial stage of dandyism, the gilded youth, was a political statement of dressing in an aristocratic style in order to distinguish its members from the sans-culottes.

During his heyday, Beau Brummell’s dictat on both fashion and etiquette reigned supreme. His habits of dress and fashion were much imitated, especially in France, where, in a curious development, they became the rage, especially in bohemian quarters. There, dandies sometimes were celebrated in revolutionary terms: self-created men of consciously designed personality, radically breaking with past traditions. With elaborate dress and idle, decadent styles of life, French bohemian dandies sought to convey contempt for and superiority to bourgeois society. In the latter 19th century, this fancy-dress bohemianism was a major influence on the Symbolist movement in French literature.

Baudelaire was deeply interested in dandyism, and memorably wrote that a dandy aspirant must have “no profession other than elegance … no other status, but that of cultivating the idea of beauty in their own persons … The dandy must aspire to be sublime without interruption; he must live and sleep before a mirror.” Other French intellectuals also were interested in the dandies strolling the streets and boulevards of Paris. Jules Amédée Barbey d’Aurevilly wrote The Anatomy of Dandyism, an essay devoted, in great measure, to examining the career of Beau Brummell. 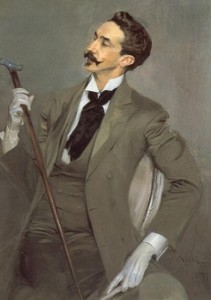 The literary dandy is a familiar figure in the writings, and sometimes the self-presentation, of Oscar Wilde, H.H. Munro (Clovis and Reginald), P.G. Wodehouse (Bertie Wooster) and Ronald Firbank, writers linked by their subversive air.

At the end of the 19th century, American dandies were called dudes. Evander Berry Wall was nicknamed the “King of the Dudes”.

George Walden, in the essay Who’s a Dandy?, identifies Noël Coward, Andy Warhol, and Quentin Crisp as modern dandies. The character Psmith in the novels of P. G. Wodehouse is regarded to be a dandy, both physically and intellectually; Bertie Wooster, narrator of Wodehouse’s Jeeves novels, does his most to be a dandy, only to have Jeeves undermine all his plans to this end. Agatha Christie’s Poirot is said to be a dandy.

The artist, writer, and hedonist Sebastian Horsley identified himself as a dandy, and discusses the subject at length in his biography.

In Japan, dandyism became a fashion subculture during the late 1990s. Presently, the term is also used to refer to an attractive but older, well-dressed man, usually a man in his late 40’s or 50’s. 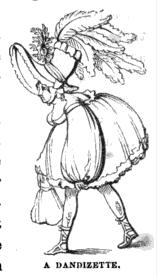 The female counterpart is a quaintrelle. In the 12th century, cointerrels (male) and cointrelles (female) emerged, based upon coint, indicating a person of beautiful dress and refined speech. By the 18th century, coint became quaint, indicating elegant speech and beauty. Middle English dictionaries note quaintrelle as a beautifully dressed woman (or overally dressed), but do not include the favorable personality elements of grace and charm. The notion of a quaintrelle sharing the major philosophical components of refinement with dandies is a modern development, one which returns quaintrelles to their historic roots.

Female dandies did overlap with male dandies for a brief period during the early 19th century when dandy had a derisive definition of “fop” or “over-the-top fellow”; the female equivalents were dandyess or dandizette. Charles Dickens, in All the Year Around (1869) comments, “The dandies and dandizettes of 1819-1820 must have been a strange race. Dandizette was a term applied to feminine devotees to dress and their absurdities were fully equal to those of the dandy.” In 1819, the novel Charms of Dandyism was published “by Olivia Moreland, chief of the female dandies”; although probably written by Thomas Ashe, “Olivia Moreland” may have existed, as Ashe did write several novels about living persons. Throughout the novel, dandyism is associated with “living in style”. Later, as the word dandy evolved to denote refinement, it became applied solely to men. Popular Culture and Performance in the Victorian City(2003) notes this evolution in the latter 1800s: “…or dandizette, although the term was increasingly reserved for men.”