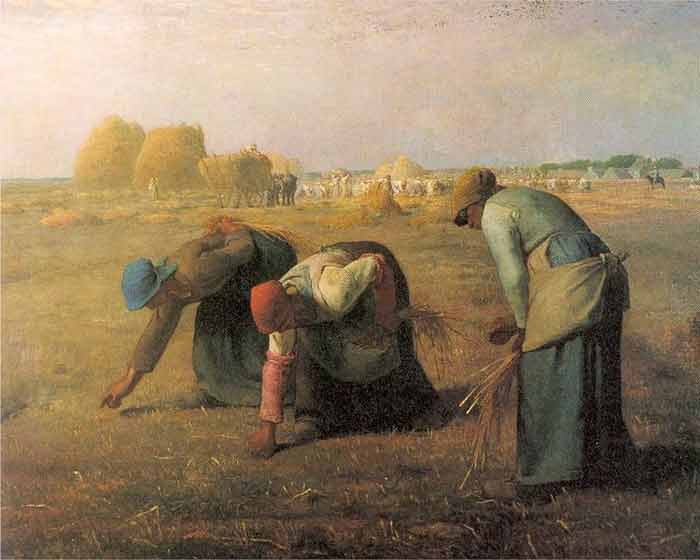 (circa 1830–1870) of painters is named after the village of Barbizon near Fontainebleau Forest, France, where the artists gathered. The Barbizon painters were part of a movement towards realism in art which arose in the context of the dominant Romantic Movement of the time.

In 1824 the Salon de Paris exhibited works of John Constable. His rural scenes influenced some of the younger artists of the time, moving them to abandon formalism and to draw inspiration directly from nature. Natural scenes became the subjects of their paintings rather than mere backdrops to dramatic events.

During the Revolutions of 1848 artists gathered at Barbizon to follow Constable’s ideas, making nature the subject of their paintings.

One of them, Jean-François Millet, extended the idea from landscape to figures — peasant figures, scenes of peasant life, and work in the fields. In The Gleaners (1857), Millet portrays three peasant women working at the harvest. There is no drama and no story told, merely three peasant women in a field. Gleaners are poor women gathering what’s left after the rich owners of the field finished harvesting. The owners and their laborers are seen in the back of the painting. Millet here shifted the focus, the subject matter, from the rich and prominent to those at the bottom of the social ladders. Millet also didn’t paint their faces to emphasize their anonymity and marginalized position. Their bowed bodies are representative of their every day hard work.