The controversial Restoration of Holbein’s “Ambassadors” 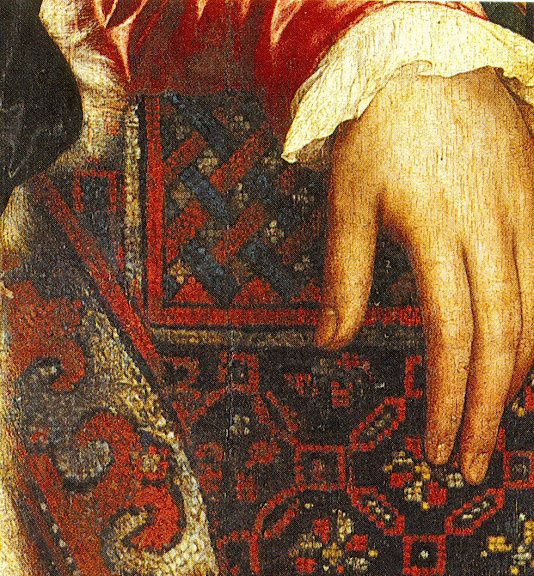 The controversial Restoration of Holbein’s “Ambassadors”

The Early Music pioneer (Sir) John Eliot Gardiner recently left the Daily Telegraph’s music critic, Ivan Hewett, reeling with incredulity by saying that he had not seen himself as a crusading musicological force but simply as a jobbing musician who recognised that “other views are valid, as long as they’re convincing in performance”. For Hewett, Gardiner had long epitomised the radical movement to “scrape the varnish” off music by playing on obsolete period instruments and eschewing later styles and types of musical understanding in attempt to produce historically authentic performances. A section of the rug, before treatment in the Esso-sponsored, BBC-filmed, 1993-96 restoration. The same section after cleaning and repainting. (Note changes to the design and shading of the rug.) Click on an image to see a larger version. Then click on the arrows above to toggle between the ‘before’ and ‘after’. Notice how the carpet changes

For over half a century after the Second World War picture restorers at the National Gallery, London, sought to recover the historically authentic appearances of paintings by first removing all (supposedly) non-original and “inauthentic” material and then using their judgements to paint hypothetical reconstructions in areas of lost or damaged paint – see illustrations, right. The gallery now claims in its new hand book, Conservation of Paintings [1], that its pictures are changed “primarily for aesthetic reasons” (page 53) on the “aesthetic objectives of those responsible for the cleaning” (page 45) and that although such “different aesthetic decisions” produce results that “may look very different”, all results can “be equally valid as long as they can be pursued safely” (page 53).

To gauge the significance of these seemingly similar recent professional reformulations, it is important to appreciate the extent to which the 20th century cult of simulated historical authenticity had profoundly different consequences in music and painting.

Music is an “adversarial” art where interpretation is both of the essence and healthily subject to criticism. If Gardiner plays Monteverdi or Bach as if frozen in time, as if musical instruments had undergone no evolution, as if Haydn or Beethoven had never existed, the interpretive potential of their music might be constricted on a point of musicological dogma, but nothing is permanently lost and something is gained. Gardiner, as a bona fide creative musician, cannot do other than interpret composers’ guiding notations (and thereby add to the stock of musical readings). While all performances are individual resurrections-through-interpretation, all performers must nonetheless appeal to the critical sensibilities of living audiences and professional critics. In music, there can be no final solutions because the original authorial texts (the scores) remain sacrosanct and leave every composer permanently up for interpretive grabs. This is why even the most revered and legendary recorded interpretations must coexist in critical engagement with other historical or more recently recorded performances [2] – and why BBC Radio 3’s CD Review is the most perpetually nourishing and stimulating programme on air. The anamorphic skull before cleaning and repainting.

and larger losses, probably owing to damp, to the left of centre. The picture was last treated over a century ago. Then – or perhaps before – these losses had rather clumsily been made good. This later paint had discoloured, disfiguring the picture, and could easily be seen. Technical examination established that most of it lay over earlier varnish or earlier losses. As the overpaint was clearly distinguishable and much softer than 16th century paint, it could be safely removed. The losses will now be made good (with easily removable paint) so that this intriguing distortion can work as far as possible as Holbein intended it…”In a subsequent letter to the press (The Times, 1 November 1997), Mr MacGregor conceded that “recovering the intentions of a long-dead artist is a complex and tentative business”.”] But while one interpretation/performance can never expunge another in music, picture restorers thrive precisely by undoing and redoing each other’s work. Because painting is not an interpretive art form but a concrete one, the artistic consequences of such interventions can be deadly. Painters bequeath not scores to be realised through performances but fixed, artistically-live objects. Such unique creative works can be rendered artistic corpses through a single bungled restoration or be progressively falsified through the “Chinese Whispers” of successive restorers’ interpretations. Although restorers – who operate with historically alien (and often synthetic and experimental) materials on the creative works of others – have now dropped misguided quests to recover historical authenticity and claimed quasi-musical interpretive rights instead, they still continue to brook no criticisms. They alone, the National Gallery holds, may “determine the way a painting looks” (page 53) even though “controversy often follows when great paintings are transformed by cleaning” (page 5). Their profession, restorers continue to insist, is a uniquely specialised techno/aesthetic hybrid whose mysteries elude non-initiates and float beyond criticism. Unlike genuinely creative people, restorers can never concede technical errors or aesthetic misjudgements for fear of implicating the curators, trustees and sponsors who authorize and fund their actions. Museum politics demand that whatever is done last must be proclaimed right andbetter than before. Within this criticism-free zone, the National Gallery’s contention that rival restorations can be “equally valid as long as they can be achieved safely” may be a politically and institutionally convenient formulation but it begs important technical questions and evades artistic ones: how safe are current treatments? On what critical basis might equally “safe” but aesthetically contrary treatments be evaluated? [M. D.]

[1] First published in 1997 with aid from The Robert Gavron Charitable Foundation in the gallery’s “Pocket Guides” series. Its author, David Bomford, then a Senior Restorer at the gallery, is now the Associate Director for Collections at The J. Paul Getty Museum, Los Angeles.

[2] Explorations of musical interpretation have generated a rich literature. The Oxford Journals’ Early Music (for which I had the sometime privilege of illustrating its “Performing Matters” features) has examined the strengths and weaknesses of the “Early Music” movement – or HIP (Historically Informed Performance), as is sometimes preferred – through constructive and illuminating critical dialogues. In the August 1994 edition,for example, Willem Kroesburgen, a harpsichord maker, and Jed Wentz, a traverse player and leader of the group Musica ad Rhenium, challenged widespread assumptions of earlier musical decorousness by citing accounts of 17th and 18th century performances in which organs shook buildings, and singers, with mouths open wide enough to accommodate hay-wagons, screamed until their eyes rolled “like stuck pigs”, while violinists (praised for their powers of “penetration”) were instructed to hit the strings with “The full breadth of the hair” so as to make “the string vibrate strongly”.