The Death of Marat by Jacques-Louis David 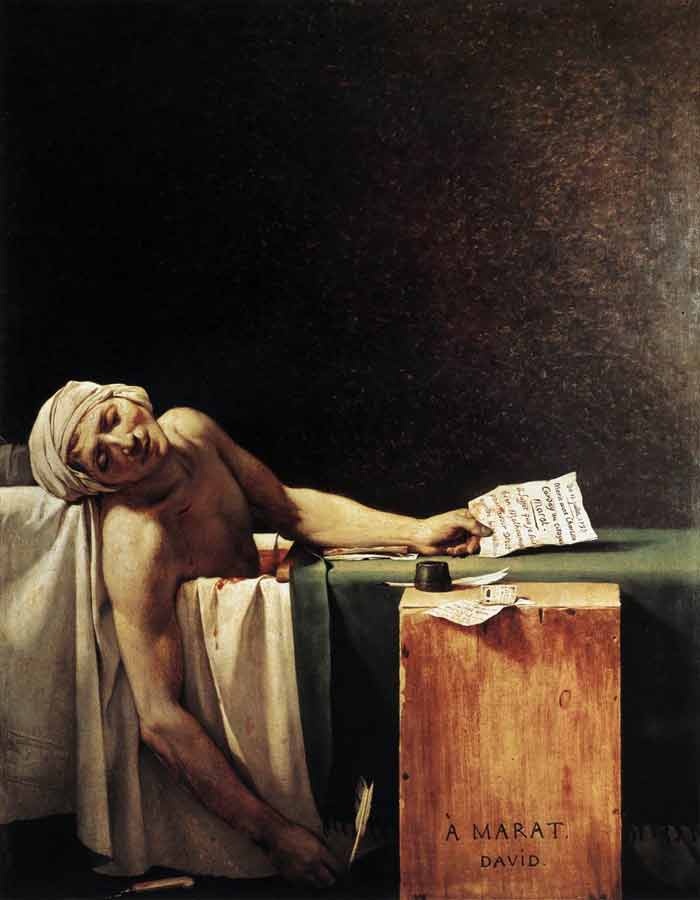 The Death of Marat by Jacques-Louis David

The Death of Marat (French: La Mort de Marat ) is a 1793 painting in the Neoclassic style by Jacques-Louis David, it is one of the most famous images of the French Revolution. This work refers to the assassination of radical journalist Jean-Paul Marat, killed on the 13th of July 1793 by Charlotte Corday, a French Revolutionary figure from a minor aristocratic family. Corday, who blamed Marat for the September Massacres and feared an all out civil war, claimed “I killed one man to save 100,000.”

Jean-Paul Marat (24 May 1743 – 13 July 1793), was a Swiss-born French physician, philosopher, political theorist and scientist best known as a radical journalist and politician from the French Revolution.

Marat often sought the comfort of a cold bath to ease violent itchings due to a skin disease long said to have been contracted years earlier, when he was forced to hide from his enemies in the Paris sewers.

David was a close friend of Marat, as well as a strong supporter of Robespierre and the Jacobins. Due to his difficulty speaking (he had a benign but large facial tumor, the result of an injury sustained while fencing), David was overwhelmed by their natural capacity for convincing crowds with their speeches. Determined to memorialize his friend, David painted this portrait of Marat. 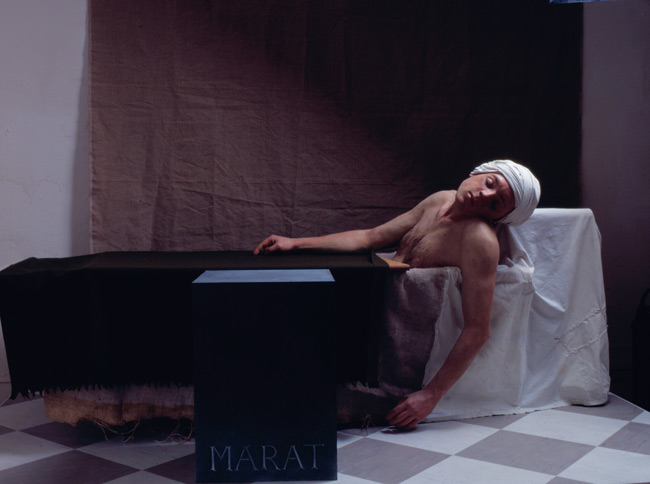 Gavin Turk, The Death of Marat

Marat’s figure appears quite idealized. For example, the painting contains no sign of his skin problems. David, however, drew other details from his visit to Marat’s residence the day before the assassination: the green rug, the papers, and the pen. David promised his peers in the National Convention that he would later depict their murdered friend invocatively as “écrivant pour le bonheur du peuple” (writing for the good of the people). The Death of Marat is designed to commemorate a personable hero. Although the name Charlotte Corday can be seen on the paper held in Marat’s left hand, the assassin herself is not visible. Close inspection of this painting shows Marat at his last breath, when Corday and many others were still nearby (Corday did not try to escape). Therefore, David intended to record more than just the horror of martyrdom. In this sense, for realistic as it is in its details, the painting, as a whole, from its start, is a methodical construction focusing on the victim, a striking set up regarded today by several critics as an “awful beautiful lie”— certainly not a photograph in the forensic scientific sense and barely the simple image it may seem (for instance, in the painting, the knife is not to be seen where Corday had left it impaled in Marat’s chest, but on the ground, beside the bathtub). 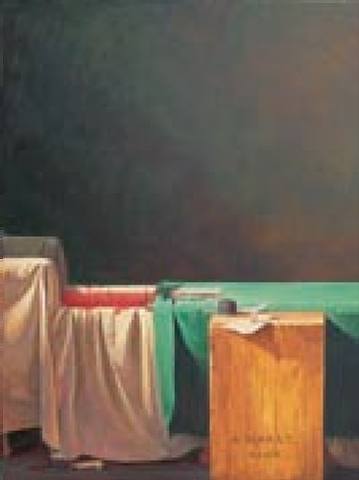 Yue Minjun, The Death of Marat

The Death of Marat has often been compared to Michelangelo’s Pietà. Note the elongated arm hanging down in both works. David admired Caravaggio’s works, especially Entombment of Christ, which mirrors The Death of Marat’s drama and light. 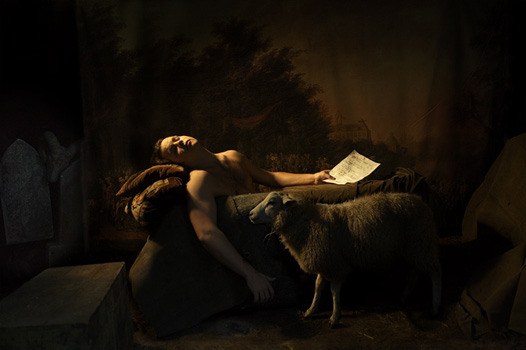 David sought to transfer the sacred qualities long associated with the monarchy and the Catholic Church to the new French Republic. He painted Marat, martyr of the Revolution, in a style reminiscent of a Christian martyr, with the face and body bathed in a soft, glowing light. As Christian Art had done it from its beginning, David also played with multileveled references to Classical Art. Suggestions that Paris could compete with Rome as Capital and Mother City of the Arts and the idea of forming a kind of new Roman Republic appealed to French Revolutionaries, who often formed David’s audience. 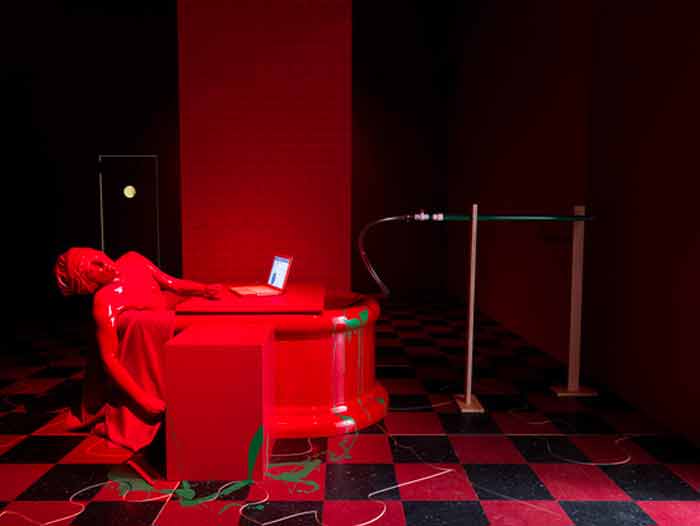 Richard Jackson, The Laundry Room (The Death of Marat)

Widely admired during the Terror whose leaders ordered several copies of the original work (copies made in 1793–1794 by David’s pupils to serve propaganda), The Death of Marat slowly ceased to be ‘frontpage history’ after Robespierre’s overthrow and execution. At his request, it was returned to David in 1795, himself being prosecuted for his involvement in the Terror as a close friend of Robespierre (he would have to wait for Napoleon’s rise to become prominent in the arts once more). From 1795 to David’s death, the painting languished in obscurity. During David’s exile in Belgium, it was hidden, somewhere in France, by Antoine Gros, David’s dearest pupil. In 1826 (and later on), the family tried to sell it, with no success at all. It was rediscovered by the critics in the mid-nineteenth century, especially by Charles Baudelaire whose famous comment in 1846 became the starting point of an increased interest among artists and scholars. In the 20th century, the painting inspired several painters (among them Picasso and Munch who delivered their own versions), poets (Alessandro Mozzambani) and writers (the most famous being Peter Weiss with his play Marat/Sade).

The original painting is currently displayed at the Royal Museum of Fine Arts in Brussels, being there as a result of a decision taken by the family to offer it, in 1886, to the city where the painter had lived quietly and died in exile after the fall of Napoleon. Some of the copies (the exact number of those completed remains uncertain) made by David’s pupils (among them, Serangeli and Gérard) survived, notably visible in the museums of Dijon, Reims, and Versailles. The original letter, with bloodstains and bath water marks still visible, has survived and is currently intact in the ownership of Robert Lindsay, 29th Earl of Crawford.

Other artists have also depicted the death of Marat, sometimes long after the facts, whose works refer or not to David’s masterpiece. Among these later works, the Charlotte Corday by Paul Jacques Aimé Baudry, painted in 1860, during the Second Empire, when Marat’s “dark legend” (the angry monster insatiably hungry for blood) was widely spread among educated people, depicts Charlotte Corday as a true heroine of France, a model of virtue for the younger generations. The versions of Picasso and Munch are less trying to refer to the original context in itself than to confront modern issues with those of David, in terms of style.