The Women of Pablo Picasso: Marie-Thérèse Walter and Picasso

a 17 year old who Picasso then lived with in a flat across the street from his marital home (while still married to Olga).  Marie-Thérèse and  Picasso had a daughter, Maya (Maria de la Concepcion) on October 5, 1935.  (Picasso and Olga later separated although they remained married so Olga would not receive half of Picasso’s wealth — until she died in 1955. ) 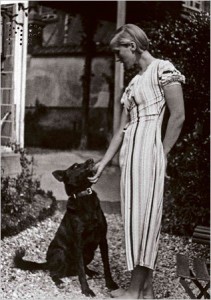 Picasso’s relation with Marie was kept from Olga until Olga was told of Marie’s pregnancy.   Marie understandably became jealous when Picasso started to fall in love with Dora Maar in 1936, a year after Maya was born.  It was Marie-Thérèse who was the inspiration for many of Picasso’s famous Vollard Suite etchings.  Marie-Thérèse died by hanging herself in 1977, four years after Picasso died.  Maya’s son, Olivier Widmaier wrote “Picasso: The Real Family Story” about his artist grandfather, in 2004.