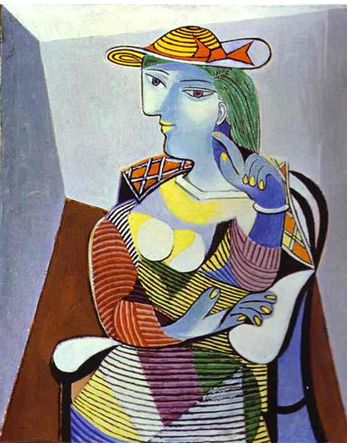 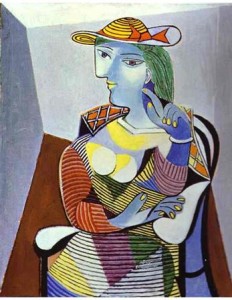 Would you fork out your redundancy money to buy a Picasso off the internet? Happens all the time. The Daily Telegraph’s Elizabeth Fortescue reported last week that a young Sydney woman took her online Picasso to an “antiques roadshow” in Dee Why the other day. She asked the expert if she’d done the right thing. The news was stunning. 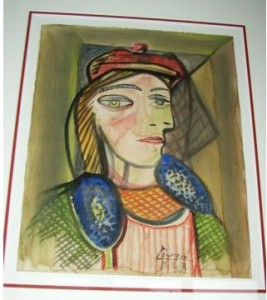 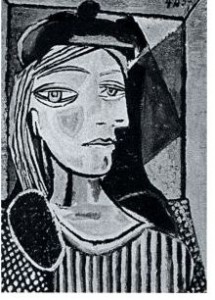 Fine art valuer Sue-ann Smiles immediately identified it as a Picasso. “I knew straight away. Quite frankly, (the painting) should be in the National Gallery of Australia. This is a cultural heritage piece,” she said.

The woman told Ms Smiles she had bought the painting, sight unseen, from a private owner in Europe and that she only had the person’s word that the painting was the real thing.

It’s heart-warming to know that trust still glows sweetly in cynical Sydney. And gratifying that such trust is rewarded so handsomely.

In no time at all, the story was picked up by Sky News. The world marvelled at the buyer’s good fortune. Ms Smiles would not be drawn on the value of the picture but coyly remarked that it would pay off the mortgage.

It certainly would, if it was genuine. Dated 1937, it purports to be one of a series of important Picasso portraits of his mistress, Marie-Therese Walter. Worth perhaps $2 or $3 million.

In fact it’s worth nothing. It is a watercolour copy of an oil painted by Picasso on 4 December 1937.

A rather amateurish copy, but then they nearly always are. Semi-abstract or abstract works seem easy to imitate. Picasso’s swash-buckling style, apparently casual and rough, appeals to copyists and fakers because they think errors will be seen as creative enthusiasm. In fact, Picasso is difficult to fake convincingly. His strength of composition and mastery of line are such that fakes usually look weak and labored, as this copy does:

In the last few years I’ve examined dozens of Picassos like the Dee Why bargain. The online sellers typically claim to have found them in estate sales or in flea markets, and only wish they had time to authenticate them. People buy these internet masterpieces, then seek to have them authenticated. Here’s one I saw on eBay just now: 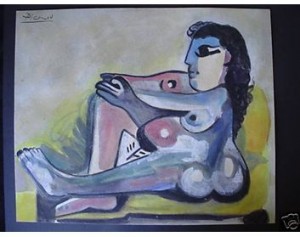 Bidding started at $200 and it just allegedly sold for $900. (As bidders’ identities are hidden on eBay, no one knows if sellers are bidding on their own item to drive the price up. There’s no guarantee the anonymous bids are genuine.)

A real Picasso like this would be worth perhaps $200,000. The seller must be too busy to pop down to Sotheby’s. But wait, he has taken the trouble to authenticate the picture:

(IT) COMES WITH A CERTIFICATE OF AUTHENTICITY FROM ART HISTORIAN AND CERTIFIED COURT APPRAISER ATTRIBUTING THE PAINTING TO PABLO PICASSO.

Alas, the “certificate of authenticity” merely “attributes” the painting to Picasso. This is art-speak for “legally, we’re claiming nothing”. The name of the “certified court appraiser” is not given.

But it comes from a wonderful home:

THIS PAINTING WAS ACQUIRED AT A PRIVATE ESTATE SALE AUCTION IN FRANCE . THIS AMAZING COLLECTION HAS BEEN KEPT IN STORAGE UNFRAMED FOR MANY YEARS.

In case you missed the point about “attributed” when you discover you’ve paid real money for a brand new fake, the seller points to his tightly covered a-se again:

THERE IS NO IMPECCABLE PROVENANCE WITH THIS PAINTING. IN ANY EVENT, YOU ACKNOWLEDGE THAT THE PAINTING IS BEING SOLD AS IS.

People sometimes pay thousands for vulgar fakes like this.

At any one time there are around 50,000 paintings for sale on eBay. Much is genuine garbage, and most of the rest is phony. The shades and subtleties of deceit are legion.

The Australian media know little about art, but they could at least check before prematurely ejaculating. I wonder if Sky News or theTele will issue corrections?

Crikey contacted the Tele’s Elizabeth Fortescue for comment but she didn’t get back before deadline.