Manet’s Oil Painting Technique. His use of black as a colour. 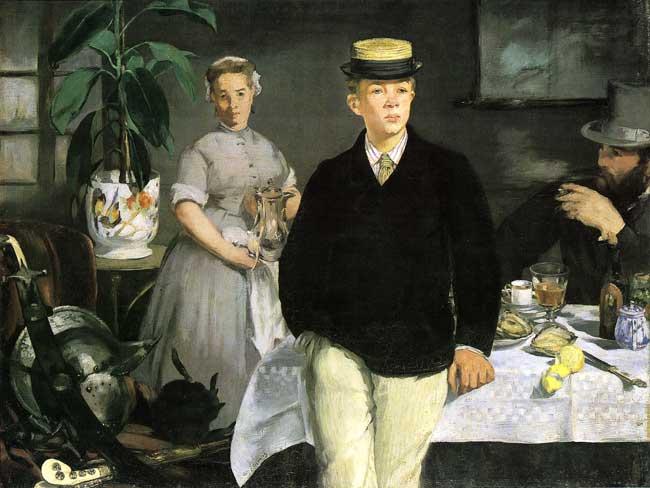 How to Paint in Oils Breakfast in the Studio 1868

Manet’s use of juxtaposed areas of dark tone, and his use of black-as a colour, and not as a tone (which are characteristics of much of his work, particularly of the 1860s) was wholly different from that of’ many of’ his contemporaries and demonstrates a very different
technical procedure.

Many mid -19th century painters favoured the use of bitumen, because of its beautiful, transparent brown colour. They loaded canvases with this unstable pigment and produced works which were superficially dramatic and flashy. The comments of Quentin Bell, although he is talking specifically of mid – l9th century British painters, are equally relevant to many French artists. He uses the term “slosh” and says:

“… it was a method of painting and also, I think a state of mind. Slosh was liberty degenerating into licence, the bravura that serves to conceal feebleness … it was the method of painters who worked with a big thick brush loaded with bitumen, bitumen which would glow with a splendid dark warmth when new, “like the tone of an old brown violin”, but which would presently darken and crack … . Slosh is all manner and no matter, all parade and no feeling, all skill and no direction. ”

Manet was the very antithesis of’ a “slosher“. He exercised a clear decisiveness in his organisation of the picture plane, distributed his tone throughout the format to direct the eye over the surface and to allude to the three-dimensional form, and he used a painterly technique judiciously, with a sensitive understanding of paint quality. There was nothing of the ostentatious showman in Manet, no indulgence in paint to conceal problems, but rather a use of brush and pigment, tonality and colour, to reveal his perception of the contemporary environment and of the pictorial surface.