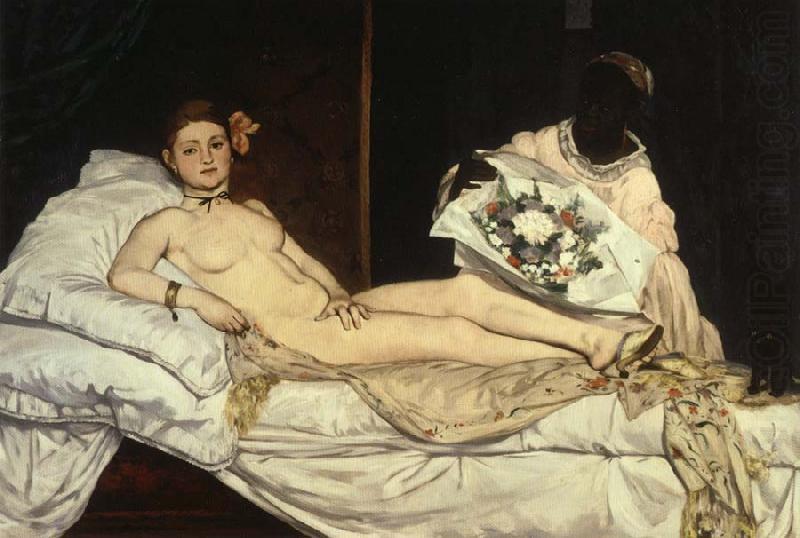 Manet’s exploration of the visual and pictorial implications of a simplified tonal scheme culminated in the assurance with which he handled the nude in Olympia (1863). It is worth quoting Hamilton at some length for his assessment of the technique used in this painting and the public response to this painting.

“In the Olympia the technical and conceptual experiments of the earlier years finally found a coherent and complete expression. The restricted colour range of the Bullfight, the full frontal lighting of the Dead Christ, the contemporary subject devoid of any moralizing or romantic idealization which he had sought but never achieved in the Spanish themes and which had been compromised in the Dejeuner sur l’Herbe by the
ambiguous treatment of’ the theme, all this was now realized in terms of simplified colour and design and with a new assurance in technique. Manet’s technical innovation lay in the suppression of almost all the intermediate values between the highest light and the deepest shade. Only along the edges of the forms, along the contours, was there a pronounced and then very abrupt change in value. Today we read these outlined shapes as three-dimensional form without difficulty; in 1865 to eyes so long accustomed to more complex and gradual transitions from light to dark, Olympia looked like an arrangement of flat patterns lacking the depth and three-dimensionality needed in such elaborate compositions.”