Masterpiece and Sitter: Sargent and The Sitwells 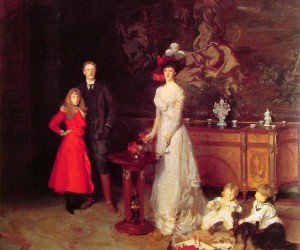 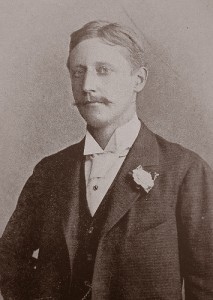 (father of the famous writer Dame Edith Sitwell) was a very bizarre man in many ways. He was a keen gardener (he actually studied garden design) and, annoyed by the wasps in his garden, he invented a pistol for shooting them. After he moved to Italy to avoid taxes in Britain, he refused to pay his new wife’s debts which resulted in her spending three months in prison. He was such an avid reader and collector of books that he had seven libraries in his home. Other eccentricities included paying his son an allowance based on the amount paid by one of his forebears to his son during the Black Death, and trying to pay his son’s Eton school fees with produce from his garden. But perhaps most bizarrely, Sir George had the cows on his estate stenciled in a blue and white Chinese willow pattern in order to make them look better. This is the notice that Sir George hung on the gate of his manor in Derbyshire, England: “I must ask anyone entering the house never to contradict me or differ from me in any way, as it interferes with the functioning of my gastric juices and prevents my sleeping at night.” 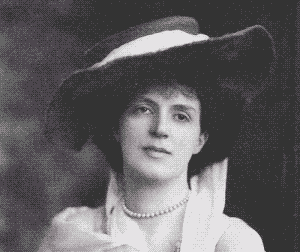 According to Sacheverell Sitwell, “his mother had only met his father twice at luncheon before their marriage; within a few days of the wedding she ran home to her parents, but was firmly sent back to her husband. This was perhaps not surprising; sex did not rank high on the long list of Sir George’s interests. According to family tradition, Edith, Osbert and Sachie were conceived with a ritual deliberation. Sir George would prepare himself for his act of dynastic responsibility by immersing himself in suitable books and works of art. He would then announce, ‘Ida, I am ready!’ and the procreation of another Sitwell genius would take place.”

Sir George Sitwell married the Honorable Ida Emily Augusta Denison, daughter of the future Earl of Londesborough, on November 26, 1886.  To Sir George, it was not her beauty that was the greatest attraction or asset.  Indeed, it was the “blue blood” that ran through her veins and her direct descent from the former ruling house of Plantagenet, that made her his ideal choice of bride.

As Osbert relates in Left Hand, Right Hand!, the occasion of marriage appears to to have precipitated Sir George into a flurry of artistic patronage.

After a wedding present of a conventional outdoor portrait of Lady Ida in a chaise by Heywood Hardy,  he commissioned a series of drawings of himself and his wife from Lillie Langtry’s favorite artist, Frank Miles.

By September of the following year, he was considering approaching two of the leading painters of the classical revival,  Lawrence Alma-Tadema and William Blake Richmond, for a larger painting which would do justice to his young wife’s Grecian features.

In 1888, he wrote home to his agent Peveril Turnbull: “(Richmond) wishes to paint her in an amber dress of a loose and rather aesthetic character and totally unlike in every particular to the style and feeling of those she wears.” And three weeks later:  “Richmond gave up of his own accord his dress after it had been made and looked hideous.  Now he has begun a portrait of Ida in one of his lolling back positions. I have told him, I dislike it, I wonder if he will kick?”

Osbert observes; “ the eventual portrait – not sitting in one of his lolling back positions, but uncomfortably upright,  dressed in a turquoise blue coat and playing a zither, an instrument she had never seen in her life until she had sat to Richmond  –  is very hideous and insignificant, although a pretty likeness.  My father, on receiving it was anxious to cut out the head, frame it as a small oval picture and burn the rest!”