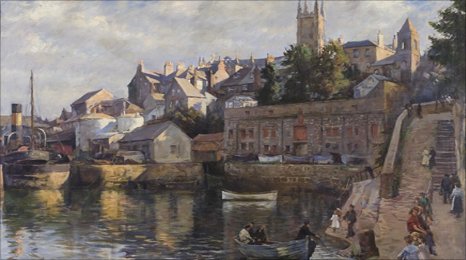 Grants of £130,000 together with generous donations from many private individuals has meant the iconic view of Penzance is secure.

Painted in 1921 the painting is loved throughout the country through its use on greetings cards and prints.

It will now continue to be displayed less than half a mile from where it was painted.

The success of the fundraising campaign means this important part of Cornish heritage is available for everyone to enjoy at Penlee House Gallery & Museum.

Director of Penlee House Gallery & Museum, Alison Bevan, said: “We have been overwhelmed by the strength of public feeling towards keeping this well loved painting at Penlee House.

“We are absolutely delighted that the National Heritage Memorial Fund and V&A/MLA grants have allowed this to happen.

“The painting has been on display while the campaign has been running and will now remain on our walls for the foreseeable future.”

Carole Souter, Chief Executive of the NHMF, commented: “This is great news.

“For thirty years the National Heritage Memorial Fund has been saving the nation’s most important treasures and now this piece of quintessentially Cornish heritage will join an outstanding collection.”

Not only did he achieve great acclaim, bringing Newlyn art colony to prominence, the School of Painting he founded with his wife Elizabeth also ensured Cornwall’s central role in British art throughout the 20th century.

Painted ‘en plein air’ at the bottom of Abbey Slip in Penzance, this superb example of Forbes’s later work combines meticulous recording of the built environment with highly accomplished painterly technique, brilliantly capturing the play of light on water.

The painting was exhibited at the Royal Academy in 1922 and was also included in the landmark ‘Painting in Newlyn’ exhibition at the Barbican Art Gallery, London, in 1985. Since then it has been exhibited many times at Penlee House.