Picasso painting can be sold at Christie’s

A judge ruled Tuesday that a Picasso painting can be sold at auction, despite a claim that its former owner was forced by the Nazis to sell it in the 1930s because his family descended from Jews.  U.S. District Judge Jed S. Rakoff issued the order four days after Julius H. Schoeps, an heir to Berlin banker Paul von Mendelssohn-Bartholdy, filed a lawsuit in Manhattan to stop the sale. 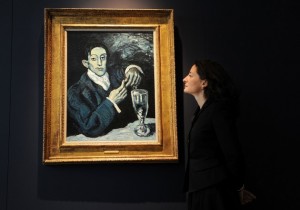 The judge had temporarily blocked the auction of “Portrait de Angel Fernandez de Soto”. The painting, expected to fetch up to $60 million, was scheduled to be sold at Christie’s “Portrait de Angel Fernandez de Soto” on Wednesday.  The painting of de Soto, who shared a studio with Pablo Picasso, is being sold by the Sir Andrew Lloyd Webber Art Foundation, a London-based charity.

In the lawsuit, Schoeps sought to be declared the lawful owner. A lawyer for Schoeps said outside court Tuesday that he would refile the case in state court on Wednesday.

The oil-on-canvas painting, signed and dated 1903, was described in a Christie’s catalog as capturing de Soto’s haunting face: “The elegantly dressed sitter appears to scrutinize the viewer with an intense gaze, his inner agitation suggested by the forceful brushstrokes and the cloud of smoke hovering above him.”

In a statement Tuesday, the foundation dismissed Schoeps’ lawsuit as “utterly spurious without legal or factual substance.”  It said the painting was purchased at a Sotheby’s auction in 1995 and exhibited on many occasions since.  The foundation said the painting’s provenance was never questioned during that 11-year period until now.

Christie’s said the painting was being sold by the foundation for income to be spent on a variety of charitable purposes.

The lawsuit said Mendelssohn-Bartholdy was subjected to Nazi intimidation that forced him to flee his mansion and begin selling prized paintings in a depressed art market.  He placed five Picassos, including the de Soto painting, on consignment with Berlin art dealer Justin K. Thannhauser in 1934, the lawsuit said.  According to the lawsuit, Thannhauser sold the painting in 1936 to M. Knoedler & Co. in New York.  Mendelssohn-Bartholdy died in 1935.  The family included composer Felix Mendelssohn.