An art colony or artists’ colony is a place where creative practitioners live and interact with one another. Artists are often invited or selected through a formal process, for a residency from a few weeks to over a year. Beginning with the early 20th century models, such as MacDowell Colony and Yaddo, hundreds of modern-day artist colonies now offer the benefit of time, space, and collaborative time away from the usual workaday world. Worldwide, the two primary organizations serving artist colonies and residential centres are Res Artis, based in Amsterdam, and the Alliance of Artists Communities, based in Providence, Rhode Island. The Intra Asia Network, based in Taiwan, is a less formal body working to advance creative communities and exchanges throughout Asia. These consortia comprise most of the world’s active artists’ colonies.

The movement itself has only started to be investigated by scholars, with the chief historical studies consisting of Michael Jacobs’s introductory The Good and Simple Life and Nina Lübbren’s Artists’ Colonies in Europe 1870-1910. 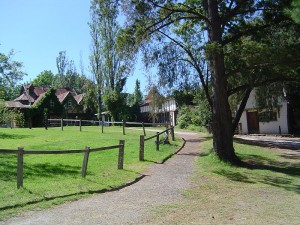 Art colonies initially emerged as village movements in the 19th and early 20th century. It is estimated that between 1830 and 1914 some 3000 professional artists participated in a mass movement away from urban centres into the countryside, residing for varying lengths of time in over 80 communities. There seem to have been three chief forms of these settlements, consisting of

In the latter villages, artists invariably bought or built their own houses and studios.

There is no simple explanation for the spread of informal art communities, although it is clearly linked with a growing nostalgia for the countryside as urbanisation and industrialisation accelerated. It was not just that the artists were themselves taking a break from big city life. There was a strong economic incentive for artists to take up temporary or permanent settlement in a village. The mid 19th century saw a market for rural paintings emerge and rapidly expand, a market which appears to have favoured pictures encapsulating the escapist daydreams of an urban middleclass audience—to borrow a phrase from the political scientist Klaus Bergmann, there was an appetite for art that might be best described as ‘agrarian romanticism’. Nostalgia was the rule, with the most successful artists repeatedly portraying in their work forms of rural life that were authentic, pre-modern, idyllic and connected with the rhythms of nature (values attested by Paul Gauguin’s comment in an 1888 letter from Pont-Aven, ‘J’aime la Bretagne: j’y trouve le sauvage, le primitif.’ – I love Brittany: I find there the savage, the primitive). In this sense paintings of peasants were evidently more about urban painters’ reacting against the racing modernisation of contemporary life, than about daily existence in the countryside. As late as 1914, when such customs had all but disappeared, painters were still depicting country communities as consisting largely of pre-industrial peasants in traditional folk dress.

Significantly, the residents of art colonies resolutely adhered to bourgeois morés. At a time when urban artists were evolving customs of behaviour and professional practice that we now identify as modernist, those in art colonies affected only mild bohemian mannerisms, and they thoroughly recoiled from avant-garde postures. There were concessions to bohemian styles of dress—straw hats, velvet coats, clogs and long hair were common—but that is about all. The confrontational, alienated, down-with-convention behaviour of resolute vanguardists was to be an urban cultural phenomenon, and had no real place in rural villages. Art colonies were also not as easily susceptible to fashion, although it is not strictly true that they discouraged stylistic innovators. Art colonies were pluralist and tolerant in outlook, and it was common to find some resident artists practicing modes of painting that were decades old. Nevertheless art colonies were the driving force behind plein-airism through the early to mid 19th century, initially developing approaches to painting outdoors that were subsequently popularised by theImpressionists.

While artist colonies appeared right across Europe, as well as in America and Australia, Lübbren has found that the majority of colonies were clustered in the Netherlands, Central Germany, and France (encircling Paris). Overall artists of 35 different nationalities were represented throughout these colonies, with Americans, Germans and British forming the largest participating groups. This gave socialising a cosmopolitan flavour: ‘Russia, Sweden, England, Austria, Germany, France, Australia and the United States were represented at our table, all as one large family, and striving towards the same goal,’ the painter Annie Goater penned in 1885 in an essay on her recent experiences at one French colony. Villages can also be classified according to the nationalities they attracted. Barbizon, Pont-Aven, Giverny, Katwijk, Newlyn and Dachau drew artists from around the world and had a pronounced international flavour. Americans were always a major presence at Rijsoord, Egmond, Grèz-sur-Loing, Laren and St Ives; Grèz-sur-Loing went through a Scandinavian phase in the 1880s; and Germans were the largest group after the indigenous Dutch at Katwijk. On the other hand foreigners were rare at Sint-Martens-Latem, Tervuren, Nagybanya, Kronberg, Skagen, Staithes,Worpswede and Willingshausen.

Some painters were renowned within artistic circles for settling down permanently in a single village, most notably Jean-François Millet at Barbizon, Robert Wylie at Pont-Aven, Otto Modersohn at Worpswede, Heinrich Otto at Willinghausen, and Claude Monet at Giverny. They were not necessarily leaders, although these artists were respected and held a certain moral authority in their respective colonies. There were also regular ‘colony hoppers’ who moved about the art colonies of Europe in a nomadic fashion. Max Liebermann, for instance, painted at Barbizon, Dachau, Etzenhausen and at least six short-lived Dutch colonies; Frederick Waugh worked in Barbizon, Concarneau, Grèz-sur-Loing, St Ives and Provincetown in the United States; Evert Pieters was active at Barbizon, Egmond, Katwijk, Laren, Blaricum, Volendam and Oosterbeek; Elizabeth Armstrong Forbes painted at Pont-Aven, Zandvoort, Newlyn and St Ives.

The greater number of early European art colonies were to be casualties of the First World War. Europe was no longer the same place socially, politically, economically and culturally, and art colonies seemed a quaint anachronism in an abrasively modernist world. However, a small proportion did endure in one or another form, and owe their continuing existence to cultural tourism. The colonies of Ahrenshoop, Barbizon, Fischerhude, Katwijk, Laren, Sint-Martens-Latem, Skagen, Volendam, Willingshausen and Worpswede not only still operate in a modest fashion, but run their own museums where, besides maintaining historic collections of work produced at the colony, they organise exhibition and lecture programs. If they have not fared as well, several formerly major colonies such as Concarneau and Newlyn are remembered via small yet significant collections of pictures held in regional museums. Other colonies succumbed during the late 20th century to cultural entrepreneurs who have redeveloped villages in the effort to simulate, within certain kitsch parameters, the ‘authentic’ appearance of the colony during its artistic heyday. This is not always successful, with Giverny, Grèz-sur-Loing, Kronberg, Le Pouldu, Pont-Aven, Schwaan and Tervuren probably being among the most insensitively commercialised of the former art colonies.

Eastern European Colonies in the 20th and 21st Century

Many art colonies continue across Eastern Europe in Bulgaria, Slovenia, Croatia, Macedonia and Serbia. They are organised by a range of bodies including city councils, monasteries, private collectors and artists. Generally the colonies only exist for a few weeks each year as many of the participants work on an academic calendar. Some of the colonies (Stumista) have been in existence for over 40 years and their reputation allows them to attract a range of international artists. Some examples of these groups may be found at:

Some art colonies are organized and planned, while others arise because some artists like to congregate, finding fellowship and inspiration — and constructive competition — in the company of other artists.

The American Academy in Rome, founded in 1894 originally as the American School of Classical Studies is often cited as the early model for what would become the modern arts and humanities colony. Its well-funded, well-organized campus, and extensive program of fellowships, were soon replicated by early 20th century artist colonies and their wealthy benefactors.

The MacDowell Colony in Peterborough, N.H. is generally considered to be the first planned American art colony. Edward MacDowell, a composer, and his wife, Marian, created it in 1907. MacDowell was inspired by his knowledge of the American Academy in Rome, and its mission to provide American artists with a home base at the centre of classical traditions and primary sources.

MacDowell, who was a trustee of the American Academy, believed that a rural setting, free from distractions, would prove to be creatively valuable to artists. He also believed that discussions among working artists, architects and composers would enrich their work.

In Maryland, the MId-Atlantic Plein Aire Company, most notable for the involvement of artist William David Simmons, is to this day active in its mission to bring local artists in touch with classical painting traditions.

Another famous colony, Yaddo in Saratoga Springs, N.Y., soon followed. Spencer Trask and his wife Katrina Trask conceived the idea of Yaddo in 1900, but the first residency program for artists did not formally initiate until 1926.

Ox-bow, school of art and artist residency was founded in 1910 by Frederick Fursman and Walter Marshall Clute, two faculty members from the School of the Art Institute of Chicago(SAIC). Fursman and Clute’s vision was to create a respite where faculty and students could immerse themselves completely in artmaking, surrounded by a supportive community of artists and an inspired landscape of natural dunes, woods and water. Ox-Bow is located in Saugatuck, Michigan.

In 1973, Edna St. Vincent Millay’s sister Norma created the Millay Colony for the Arts at the historic site of Steepletop in Austerlitz, NY.

The Taos art colony in Taos, New Mexico is an example of more spontaneous development. Once artists began settling and working in Taos, others came, art galleries and museumswere opened and the area became an artistic center — though not a formal, funded art colony providing artists with aid, as Yaddo and MacDowell do.

An influential art colony in New York was the Roycroft community. Nearby was the cabin of the Saturday Sketch Club used by Buffalo art students who specialized in outdoor oil painting.

Jerome, Arizona is a town of 400 people that was once a thriving copper mining town of 15,000. When the mines closed, Jerome became a ghost town in the 1950’s. In the 60’s. hippies discovered Jerome and settled there atop the Mingus Mountains, with a sweeping view of Sedona and the Verde Valley. Today, much of the population is working artists, writers,and musicians with a very eclectic mix of art galleries and working studios, open to the public.

The Studios of Key West was founded in 2006, at America’s Southernmost point, with a new genre approach and a mission of working with creative people to engage the island community at-large.