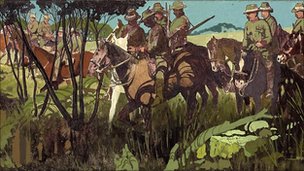 A 75-year-old Surrey woman cleared out her attic and found two paintings that could fetch up to £30,000 at auction.

The woman decided she wanted to throw the oil paintings away, but first went to her neighbour Spencer Wright to ask how to dispose of them.

Mr Wright said he realised they should not be consigned to the bin, and used an iPhone app to contact Christie’s.

He said a specialist immediately knew the value of the paintings, by Australian artist William Blamire Young.

The paintings – Light Horse and Artillery – had been bought by the woman’s father 60 years ago, but were kept in the attic because her mother did not like them.

Mr Wright said: “I knew they were something special because they were very old, and in old frames.

“They were under glass, but you could tell it was oil on canvas.

“Having the Christie’s app allowed me to go to them directly, and stopped the paintings going to the dump.”

He said he e-mailed photographs to Christie’s, who invited the two neighbours to visit for a valuation. Mr Wright said: “The nicest thing was taking them to the reception, and the specialist turning up. He automatically knew they weren’t fakes. You could tell by the expression on his face.”

He said his elderly neighbour, who has asked not to be named, told the man at Christie’s that all she wanted was a new TV, and his response was that she would be able to buy a few of them.

He added: “This kind of thing doesn’t happen every day. When you hear what they are worth, your jaw does drop.”

The artworks were painted in 1904 to celebrate the founding of the Australian army by Major General Edward Hutton, who once owned the paintings.

William Blamire Young is known for his watercolours, which is why the oil paintings are considered to be rare.