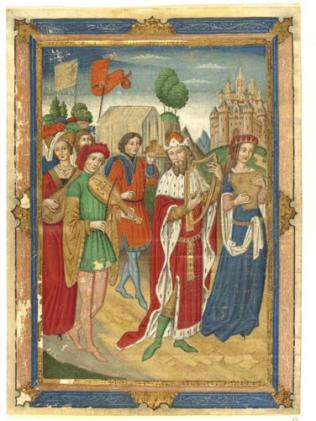 The Spanish Forger is the name given to an unidentified individual who, in the late 19th to early 20th century, created a large number of forgeries of medieval miniatures. The Spanish Forger’s works were painted on vellum or parchment leaves of genuine medieval books, using either blank margins or scraping off the original writing. He also “completed” unfinished miniatures or added missing miniatures in medieval choir books. His works fooled many experts and collectors and appear today in the collections of many museums and libraries. Over 200 forgeries have been identified.

Although he was originally thought to be Spanish, it is now believed he may have been French, working in Paris. A number of his forged miniatures have been identified as copied, with modifications, from those published in several French books published in the 1870s -1880s.

His works were very deceptive when created, but over time it has been recognized that the faces of individuals in his pictures have “sugary expressions” inconsistent with genuine medieval illuminations.  Some of his miniatures have also been identified as forgeries because they are of secular scenes that would not have appeared in genuine medieval religious texts.

The Spanish Forger’s works were the subject of an exhibition at the Morgan Library in New York City in 1978, for which an extensive catalog was published.  His works are now themselves collected as forgeries, selling for several thousand dollars each.

In January 2009, it was announced that the Victoria and Albert Museum purposely acquired five examples of the Spanish Forger’s work for their collection “for what it tells us about late 19th-century perceptions.” The museum took the works in lieu of ?20,000 ($US 30,000) of inheritance tax, equivalent to a value per work of about $6,000.