The Impasto Technique of Rembrandt 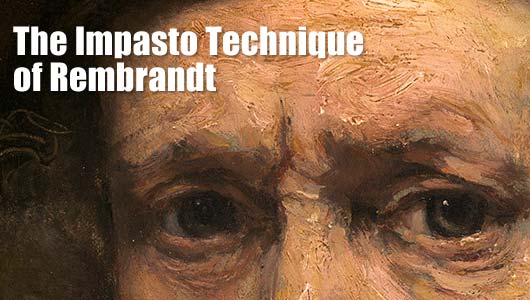 The simplest way to create an impasto surface is to apply paint in large amounts, usually with either a brush or palette knife. Commercial oil colors have a heavy consistency, so this can be achieved by working directly from the tube applying the colors in thick layers. Opacity and built-up texture are usually interrelated, with much of the thickest impasto consisting of solid and opaque pigments, such as lead white or titanium white. Passages of thickly applied paint can also be translucent, so extender pigments are chosen that supply both bulk and transparency.

The Impasto Technique of Rembrandt Impasto is paint laid on a canvas or panel in quantities that make it stand out from the surface and is usually thick enough that brush or palette knife strokes are visible. The first known use of the word was in 1784, from Italian impasto, the noun of the verb impastare “to put in paste.”

Thick passages of paint can serve a number of functions in paintings. First, the relief of impastos can intensify highlights by increasing the light-reflecting properties of the paint. This effect extends the tonal range of the painting by making highlights appear more brilliant. Second, skillfully and minutely worked impastos can depict wrinkled skin or the texture of intricately crafted surfaces of jewelry and fabrics such as in the works of Rembrandt, Frans Hals and Diego Velázquez. The nineteenth-century painter Vincent van Gogh used impastos to build up and define the forms in his paintings with thick daubs of paint, so that the viewer can see the strength and speed by which the artist applied the paint, giving them added expressiveness. Fourth, impastos can emphasize the physical qualities of the paint itself as can be seen in the works of such twentieth-century painters as Jackson Pollock and Willem de Kooning.

Rembrandt used impastos to accentuate highlights by the increased illumination of surfaces facing the light source and the exaggeration of shadows on surfaces facing away from the light source. It appears that this was the sole intention of the impasto in the illuminated parts of the face in the Self Portrait of 1659 at the National Gallery in Washington. The brushstrokes are scarcely related to the form of the face.The combination of chiaroscuro and impasto in Rembrandt’s paintings shows an affinity with the method of Titian, who was the first to use thickly applied and dragged impasto. This marked the innovation of replacing the painterly means of direct representation with a method of suggestion and illusion.

Creating Impastos in Your Paintings The simplest way to create an impasto surface is to apply paint in large amounts, usually with either a brush or palette knife. Commercial oil colors have a heavy consistency, so this can be achieved by working directly from the tube applying the colors in thick layers. Opacity and built-up texture are usually interrelated, with much of the thickest impasto consisting of solid and opaque pigments, such as lead white or titanium white. Passages of thickly applied paint can also be translucent, so extender pigments are chosen that supply both bulk and transparency.

The density of extender pigments affect the handling properties when added to oil paint. Extender pigments have a wide range of density. Chalk has a relative density of 2.7 while barite has a density of 4.4. (Relative density, or specific gravity, is the ratio of the density [mass of a unit volume] of a substance to the density of a given reference material, such as water.) The low density of chalk provides impastos in oil mediums that hold a peak that is short and stands upon drying. Oil pastes containing high density pigments, such as barite, also hold their shapes, but tend to be ‘long’ or ‘ropy.’

The type of oil has an effect on the consistency of paint and hence the form and texture of impastos. Paint made with bodied oils, especially those formed by heat polymerization, flow out and level so brushstrokes melt after being applied. Unmodified oil forms paint that is buttery and short, hence brushstrokes hold their shape upon drying. By mixing bodied and unmodified oils in different proportions many different textures can be achieved.

As technical director of Natural Pigments, I spent many hours examining the impastos of such old masters as Rembrandt and Velázquez to understand the variety of textures they employed in their paintings. The advantage they had over artists today is that they handmade their paint, so they could arrive at an endless variety of effects by tailoring the ingredients in the paint to provide the proper consistency. Not allowing this to become a disadvantage today, I sought to develop oil paint that not only has a wide range of behavior, but also painting amendments that artists today can use to change this behavior. For impastos, Rublev Colours offers three paste and putty mediums: Velázquez Medium, Impasto Medium and Impasto Putty. Velázquez Medium is an oil painting medium of finely ground calcite in heat-bodied linseed oil. It not only extends oil paint but alters its consistency, making oil colors ‘long’* for finer detail and impastos. This flowing paste makes colors slightly transparent while allowing you to build thick, impasted applications of paint. When added to oil paint it does not greatly change the color, so it can be used to create thick colored glazes. While it does reduce the opacity of pigments, such as lead white, it allows thick textures to be built up that flow but do hold their shape upon drying.

Impasto Medium is a paste medium of finely ground calcite, barite and bentonite in linseed oil. It is effective in extending oil colors to create ‘short’ and buttery impastos. Stiffer and shorter than Velázquez Medium, this paste medium makes colors slightly transparent while allowing you to build thick, impasted applications of paint. It also allows you to form thick glazes and opaque impastos that handle with the brush and palette knife equally well. The short buttery paste holds peaks and is ideal for short brushstrokes and knife marks. * Long refers to the consistency of paint that displays tall peaks when a palette knife is pressed to its surface and lifted. Long paint is also described as being ‘ropy’ and refers to a stringy quality, like that of honey. Paint that behaves in this way is said to have long rheology. Short rheology refers to paint that exhibits a more buttery consistency, typical of most commercial oil paint. Rheology is the study of how substances flow, such as liquids and soft solids that flow rather than deform elastically.