The silence of the Degas scholars

Some museums have lined up to authenticate “amazing” find of lifetime plaster casts, but the leading experts refuse to comment 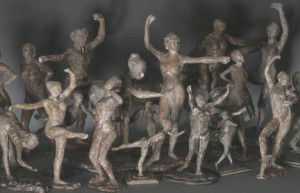 The plasters as found in situ at the Valsuani Foundry in France (Copyright The Degas Sculpture Project Ltd. All Rights Reserved. Photo: Olivier Brunet)

A secret battle is being waged over a previously unknown group of plasters of all Degas’ known sculptures that—if proved to be genuine—would represent one of this century’s greatest art discoveries. The cache was unveiled by dealer and sculpture specialist Walter Maibaum, who runs the New York-based Modernism Fine Arts, in Athens on 27 November. But so far, the discovery has received little critical analysis, despite widespread press coverage heralding the find. Behind the scenes, the experts are divided: some believe the plasters to be previously unknown lifetime casts, bringing us closer to Degas’ original sculptures. Others are convinced they were made in recent decades.

The debate is likely to come out into the open when a newly cast bronze set goes on show at the Tel Aviv Museum of Art on 25 March. Financially, much is at stake. The main group of 73 plasters is being used to cast 29 sets of bronzes, which are said to be valued at a total of more than $500m.

Until now Degas’ sculptures have survived in three forms: wax originals, which he probably later reworked, and which were repaired shortly after his death in 1917 (now mostly in the National Gallery of Art, Washington, DC); a master (modèle) set of bronzes made in 1919 from the modified waxes by the Hébrard foundry (now in the Norton Simon Museum, Pasadena); and a series of Hébrard bronze casts made from the master bronzes in 1919-36 and again in 1955-64 (dispersed among museums and private collections).

What is new is the discovery of what are said to be lifetime plasters, made from the original waxes sculpted by Degas, before they were modified and repaired. It is from these plasters that the new bronzes are being cast, one set of which is currently on show at the Herakleidon Museum in Athens (until 25 April). Established in 2004, it is a privately run museum, with works by Toulouse-Lautrec, Escher and Vasarely. But the show is not being taken as seriously as if it had been held in a long established museum with an international curatorial reputation.

“The plasters are authentic”

This is set to change with the Tel Aviv Museum of Art exhibition, which will run until 26 June. Its curator is the museum’s director, Mordechai Omer, who is an expert on sculpture. Omer told The Art Newspaper that having studied the Degas plasters, he is “firmly convinced that they and the resulting bronzes are authentic”. He admits to not consulting the leading Degas scholars (who include Richard Kendall of the Clark Art Institute in Massachusetts, Catherine Chevillot of the Musée d’Orsay in Paris and Joseph Czestochowski, co-author of Degas Sculptures: Catalogue Raisonné of the Bronzes, 2003). He says this is because they are art historians, not sculpture specialists, “which is the expertise needed here”.

Another set of bronzes will tour North American museums, starting in November 2011 at the New Orleans Museum of Art (an appropriate venue, since Degas stayed in the city in 1872-73). Preliminary consideration has been given to other US venues, including Boston, Chicago, Saint Louis and Seattle. John Bullard, New Orleans Museum director and curator of the show at his venue, is equally convinced of their authenticity. “No internationally recognised Degas sculpture experts have publicly voiced concern over them. If they have problems, they should speak out,” he told us.

Both Tel Aviv and New Orleans are expecting to receive sets of bronzes for their permanent collections after the exhibitions, bought from the Degas Sculpture Project Ltd and donated by patrons of their museums. Both Omer and Bullard reject the notion that this could suggest a conflict of interest. “We agreed to exhibit the bronzes without conditions, whether or not we were given a set for our museum,” Bullard said.

Meanwhile, European museum shows are now being organised for the Athens bronzes. These include the National Gallery in Sofia and the Macedonian Museum of Contemporary Art in Thessaloniki. Institutions in Prague and St Petersburg are being considered.

So how did the Degas plasters mysteriously appear? According to Maibaum, they were found in a storeroom at the Valsuani Foundry in Chevreuse, on the south-western outskirts of Paris. He believes that their provenance can be traced back to Degas.

Leonardo Benatov, proprietor of the foundry, sold the plasters to Maibaum, and they were shipped to New York in 2007. Twenty-two remain with Maibaum’s company, the Degas Sculpture Project Ltd, which he runs with his wife, art historian Carol Conn. Forty-nine were sold to another owner and three yet to another (there are two versions of one of the plasters). Maibaum argues that the plasters are closer to Degas’ original wax sculptures than the bronzes that were cast after his death from the modified waxes. Creating copies from a bronze model (as was done with the Degas sculptures already in museums) also leads to a shrinkage of around 2% and distortions can be introduced.

To give an idea of the potential value of the new bronzes: an Hébrard bronze of The Tub sold for $3.8m at Sotheby’s in 2008. Maibaum says the first set of the newly cast bronzes has been appraised at $20m: 29 sets would add up to $580m. He adds that only eight of the edition have been sold, and he has charged prices below the appraised value because they are going on public view.

The main set of plasters excludes Degas’ most important (and valuable) sculpture, The Little Dancer. An Hébrard cast of The Little Dancer sold at Sotheby’s on 3 February 2009 for £13.3m. In 2005 its plaster sold through Gregory Hedberg, a director at Hirschl & Adler Galleries in New York and former chief curator at the Wadsworth Atheneum, Connecticut. The buyer was Los Angeles banker Lloyd Greif. An edition of 46 bronzes is said to have been cast from the recently discovered plaster, and these have sold for around $2m each. Hedberg, like Maibaum, is convinced that the newly discovered plasters are genuine. Both believe any potential faker would have had to have access to a complete set of bronzes, and that creating the plasters would be a “near impossible” task.

Of the main set of 73 plasters, we have been able to identify some of the purchasers of the bronzes. One set has been bought by Yank Barry, a Canadian rock star-turned-businessman. Press articles on Barry’s own website record that in 1985 he was imprisoned for helping the Mafia extort $82,000 from his business partner. In 2001 he was convicted in Houston on bribery, money laundering and conspiracy charges—but was acquitted on appeal. He has since become a philanthropist, through his Global Village Market charity.

Barry recently bought one of the sets of Degas bronzes on the grounds that “as a businessman this acquisition was a marvellous investment”. He plans to lend them for public display in the Bahamas, where he now lives. His set is also expected to be lent to New Orleans for the North American tour.

Another set was acquired by Artco, a Paris company run by Serge Goldenberg, who markets Salvador Dalí prints. He has sold his bronzes to the Asia University in Taichung City, Taiwan. A third set belongs to the European-based M.T. Abraham Center for the Visual Arts, which collects modern sculpture and Russian art. Its bronzes are currently on loan to the Herakleidon Museum in Athens. The remaining five unidentified owners are American.

The bronzes are being cast with the agreement of the Degas heirs, who are receiving a fee. Degas never married, and his estate later passed to his niece, Madeleine Fèvre. There are now 15 heirs, represented by two of them, Brigitte Crepet and Frédérique Matagrin.

Most of the established Degas scholars have remained silent over the discovery, leading to the suspicion that many dispute the find. Various reasons have been suggested for their silence: some are prohibited by their museums from commenting on works on the market (such as the National Gallery of Art in Washington, DC and the Musée d’Orsay); others are said to be concerned about possible legal action, or there may be disagreements between the experts that they do not wish to air.

A private gathering of many of the sceptics—including Kendall and Patricia Failing of the University of Washington—to discuss the plasters was held in New York on 19 January, but a decision was made that none of them would discuss the matter publicly. One specialist, who did not wish to be named, told us that that the plasters are modern: “The resulting bronzes are poorly cast, the documents used to explain the provenance [including an 1892 letter from Degas to Bartholomé] have been misread, Degas’ preparatory drawings for The Little Dancer show that it looked different when it was made, and technical details on individual recent bronzes display differences from the waxes.” The specialist’s conclusion is that the plasters may have been made in recent decades from reassembling moulds from the Hébrard castings.

Maibaum insists he would like a dialogue with scholars who remain to be convinced: “A symposium should be organised so all views can be presented in a public forum.” Hedberg concurs, calling on the experts to “carefully examine the plasters and supporting information”.

Other specialists agree that it is unfortunate that there has not yet been an open and informed debate. Steven Nash, director of the Palm Springs Art Center in California, told us that he believes the plasters to be an early production, rather than recent copies. “I would be very interested in a cogent explanation of what the plasters really are if they are not early casts from Degas’ waxes,” he said.