Art Forgery. How to avoid becoming a victim of art fraud. 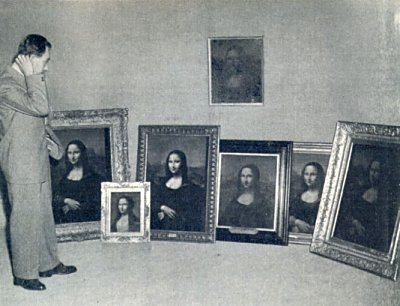 Confronting the Issue of Fake Art (original version of a story I wrote for Mumbai Mirror, which was cut down to 400 words, but I will complain about that some other day)

The next time you’re approached about a fantastic investment in an Indian work of art, BEWARE, because it is more than possible that you are buying a fake.

According to an alarming estimate made by Thomas Hoving, former director of the Metropolitan Museum of Art, up to 40% of all the works in circulation globally are really forgeries, and in the last few years, a massive number of fakes have seeped into the local art market.

Kolkata is widely known to be the hub of the trade, filled with “factories of fakes”, where unemployed fine-arts graduates and unsuccessful artists are commissioned by an organized forgery mafia to create counterfeits of the works of famous painters, which are then sold all over the world for massive profits.

There are few established artists today who do not have a story or two to tell about how their lives have been affected by counterfeit art.

Certainly the most amusing and shocking of these anecdotes is the recent case of Sahiil Art Gallery in Mumbai, whose owner had gone to the extent of circulating a fraudulently created image of the artist Subodh Gupta, posing by a painting purported to be by him, which was a fake and which was being offered by the gallery for Rs 80 lakh. Sahiil’s website, accessed mainly by clueless foreign buyers, states that, “More and more people are accessing Sahiilart site (sic) for genuine paintings.”

Arpana Caur first realized that her work was being faked when she saw a copy of one of her own paintings hanging in the background of a television serial set, and upon further investigation, she discovered that her works were being copied and sold in huge quantities not just in India, but also in New York.

Distinguishing an original from a fake is often difficult as the disparities are as subtle as the methods employed by the counterfeiters – who have become so sophisticated as to use dated materials, forged certificates of authenticity and have even begun to involve the families of artists in their con game.

In 1998, Nisha Jamval was very nearly fooled while trying to find a few Souzas for her collection. She approached Souza’s son Patrick to ask for his help in finding his father’s work, but her suspicions were immediately kindled when he offered her 57 different works for as little as Rs.20,000 apiece. To verify the authenticity of these paintings, she then contacted Souza himself, and much to her surprise, he wrote back to inform her that all 57 paintings were fake.

A similar sense of dubiousness surrounds much of Jamini Roy’s work. It is well known that a few years ago his son was caught selling fakes of his work after forging his father’s signature, and recently, even his grandson has been accused of falsely authenticating works of questionable antecedence in exchange for personal profit. Harsh Goenka, who is a celebrated patron of the arts, has gone on record to say that he has stopped buying Jaminis for this very reason.

Occasionally, even artists themselves are implicated in these scandalous dealings. The most startling of these cases involves Anjolie Ela Menon, who was accused by Bombay’s Gallery7 of trying to pass off a copy painted by her assistant as her own work. While Menon denied these charges vehemently, and threatened to take the gallery to court and sue for libel, the evidence suggesting her guilt was quite damning, including a video aired on a TV news channel in which her assistant admitted to regularly completing her work for her.

Because they are generally uninformed about the art they purchase, buyers are ultimately left at the mercy of the seller to determine the authenticity and quality of their purchases – but these parties face very little incentive to actively pursue and call out fakes, especially as the chances of discovery are so slim. Nevertheless, even the leading auction houses and art experts have been discovered holding forgeries.

In 2001, Manjit Bawa refused to acknowledge a painting being sold by Christie’s accredited to him as an original. As a result, they had to withdraw it for sale, and a year before that, Ajoy Ghosh found, much to his surprise, that two of his paintings were being marketed in their catalogue as the works of Nandlal Bose.

Two years ago, at an auction organized by Osian’s in Delhi, a fake was very nearly sold for Rs.30 lakh, under the misapprehension that it was a work painted by Bhikash Bhattacharjee. At the last moment before it could be sold, another artist, Sanjay Bhattacharyya, who was one of Bhattacharjee’s disciples, identified it as a fake and much to the collective bewilderment of the bidding public, Osian’s were forced to pull it off the stage mid auction.

The embarrassing case of the Gallery Espace Hores still remains unsolved, with defendant Renu Modi fighting the allegation, made by the daughter of Somnath Hore that an entire collection of 20 sculptures being offered by the gallery and purported to be by him were fake. Neville Tuli, of Osian’s, rose up to defend Modi by claiming that, “I’m convinced that there’s no intent to defraud. She’s done all that she can do, but always, genuine mistakes are done by anyone.”

There are two very real ways in which the art community can act immediately to curb this rampant explosion of forged artworks. The first, most efficacious way is to promote the spread transparency in the Indian art market, and to encourage the growth of a centralized institutional mechanism that will administrate galleries and dealers, and punish those who flagrantly trade in reproductions. An initiative of this sort has been in the offing for almost a decade now.

The second way is to encourage the spread of formal and standardised documentation, where artists and collectors alike publicly register their works, and thus create a database of authentic art against which forgeries and stolen works can be compared. Art registries also serve the important function of breaking down intellectual barriers, and take the control of establishing proper provenance – or chain of custody – away from the hands experts or even the artists themselves, both of whom are now charging an arm and a leg for the task of authentication, and place it back into the hands of ordinary people, therefore allowing even those who cannot afford to hire experts to be able to check and double-check the authenticity of their artworks.

Today, as the popularity of Indian Art continues to grow exponentially, the very lucrative business of forgery continues to grow with it, and unless palpable measures are not taken soon to curtail this unfortunate side effect, it threatens to permanently damage the credibility of the genre.