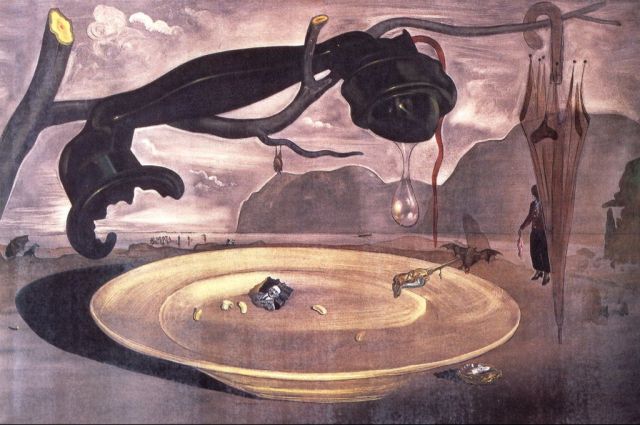 During Adolf Hitler’s childhood, academics were not his strong point. In grade school, Hitler’s grades in Mathematics, Science, History, German, and French were adequate at best and this greatly displeased his father, Alois Schickelgruber. The Enigma of Hitler, S.Dali

However, in the early 1900s Adolf Hitler showed an interest in art and began to excel very quickly. Hitler’s average grades were good enough to get him accepted in a university preparatory “gymnasium” or the technical/scientific, Realschule. He chose Realschule because they offered a course in drawing. In 1906, Adolf was permitted to visit Vienna, but he was unable to gain admission to their prestigious art school. Nonetheless, this did not stop him from creating more works of art. Hitler went on to produce many drawings throughout his life. An auction was held on April 23, 2009 for works that Hitler had painted. It was estimated that his paintings would raise $50,000 but to many people’s surprise, his paintings generated over $120,000. Hitler is depicted in a balloon overlooking marching, helmeted troops in the painting “Vision of War” by Indian artist A. Ramachandran. Though most of the imagery of the work (which is in two parts, a sculpture/installation of Ashoka is the other) is from the Mauryan period of Indian history, the painting is one of the rare instances in later 20th century Indian art which references Hitler.