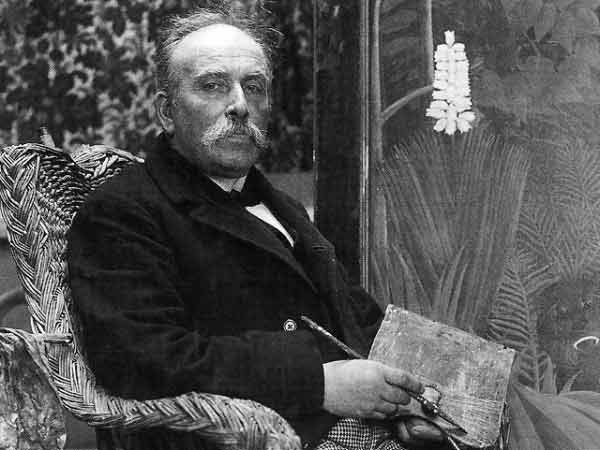 A French Naive or Primitive painter. Henri Rousseau was also known as Le Douanier (the customs officer), a humorous description of his occupation as a tax collector. Ridiculed during his life, he came to be recognized as a self-taught genius whose works are of high artistic quality. Henri Rousseau was born in Laval, France into the family of a tinsmith. He attended Laval High School as a day student and then as a boarder. He was mediocre in some subjects at the high school but won prizes for drawing and music. He worked for a lawyer and studied law, but “attempted a small perjury and sought refuge in the army,” serving for four years, starting in 1863. With his father’s death, Rousseau moved to Paris in 1868 to support his widowed mother as a government employee. In 1868, he married Clémence Boitard, his landlord’s 15 year-old daughter, with whom he had six children (only one survived). In 1871, he was appointed as a collector of the octroi tax on goods entering Paris. His wife died in 1888 and he married Josephine Noury in 1898. He started painting seriously in his early forties, and by age 49 he retired from his job to work on his art full time. Rousseau claimed he had “no teacher other than nature”, although he admitted he had received “some advice” from two established Academic painters. Essentially he was self-taught fine artist and is considered to be a naïve or primitive painter. His best known paintings depict jungle scenes, even though he never left France or saw a jungle. His inspiration came from illustrated books and the botanical gardens in Paris, as well as tableaux of taxidermied wild animals. He had also met soldiers, during his term of service, who had survived the French expedition to Mexico and listened to their stories of the subtropical country they had encountered. To the critic Arsène Alexandre, he described his frequent visits to the Jardin des Plantes: “When I go into the glass houses and I see the strange plants of exotic lands, it seems to me that I enter into a dream.” Along with his exotic scenes there was a concurrent output of smaller topographical images of the city and its suburbs.

He claimed to have invented a new genre of portrait landscape, which he achieved by starting a painting with a view such as a favourite part of the city, and then depicting a person in the foreground.