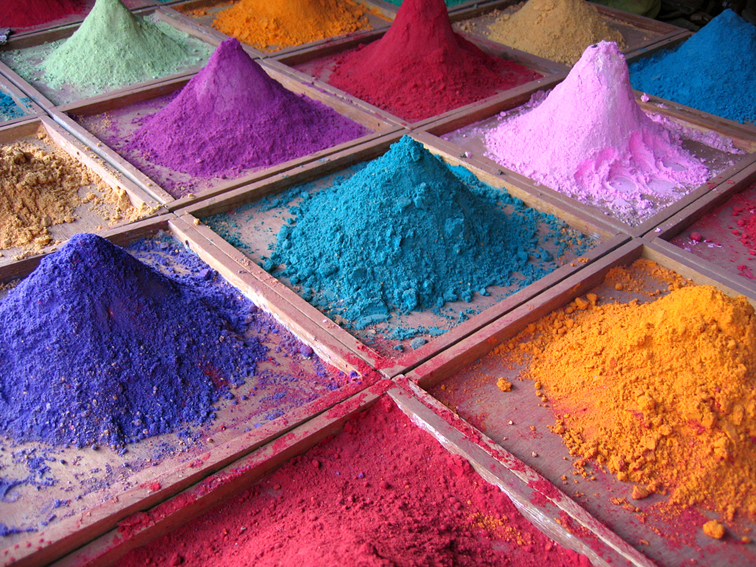 The causes of change of color in pigments are of four kinds, all of them chemical effects.

2) the action of the atmosphere;

3) the action of the medium, and

4) the action of the pigments themselves on each other. The action of light is to bring about or to assist in the decomposition of the pigment. It is less marked in oil than in water color, because the oil forms a sort of sheath for the color particles. The manner in which light does its deteriorating work is somewhat similar to that of heat.

The atmosphere affects the paint because of certain chemical elements contained in it, which tend to cause new combinations with the materials which are already in combination in the pigment.

The action of the oxygen in the air is the chief agent in affecting the pigment, and it is here particularly that light, and especially sunlight, assists in decomposition.

The air of towns and cities generally contains sulphuric and sulphurous acids and sulphuretted hydrogen. This latter gas is most effective in changing oil paintings, because of its action in turning white lead dark; and as white lead is the basis of many qualities in painting, this gas may have a very general action.

Moisture in the atmosphere is also a cause of change, but there is little to be dreaded from this, as the oil protects the colors.

Oil absorbs oxygen in drying, and so is apt to have an effect on colors liable to change from that element, and many vehicles contain materials to hasten the drying which further aid in the deterioration of the pigment. Bad oil will tend to crack the picture also. The greatest care should be used in this direction, as the most permanent colors may be ruined by bad vehicles.

Pigments will not have a deteriorating effect on each other as long as they are solid. But if one of them is soluble in the medium, then chemical action commences; but as most pigments are somewhat soluble, there is always some danger in mixing them. The best we can do is to try to have on the palette, as far as possible, only colors which are friendly to each other. As a student you should not be much occupied, however, with all this.

You must expect that all color will change somewhat. But you need not use those which change immediately or markedly, and you may use them in a way which will tend to make them change as little as may be. Colors have stood for years, and what is practical permanence, not perfect permanence, is all you need look for. If you think too much of the permanence of your colors, it will interfere with the directness of your study. Therefore, decide on a palette which is as complete and safe as you can make it, excluding the notably bad pigments, and think no more about it.

When you need to add a new color to your palette, choose it with reference to those already on it, and go ahead. This is what the whole subject resolves itself to, practically, for you as a student.