What Is An Original Picasso Graphic?

A graphic is an original work of art made in two steps.  First, the artist creates a prepared surface with the art design or image; and secondly, that image is inked and transferred directly to paper using the force of a press to push the sheet of art paper firmly against the inked surface that contains the prepared image. 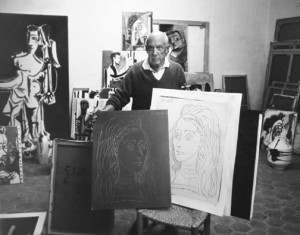 An original graphic is sometimes referred to as a print, not to be confused with an inexpensively produced reproduction (which is a copy of a work of art that was originally created in another medium).

The forms of prints (or original graphics) that are most common are intaglios such as etchings, engravings, linoleum and wood block prints, and the planographic medium of lithographs.  Although Picasso is known to be the greatest painter and most innovative sculptor of the 20th century, he was also its foremost printer.

The process of printmaking requires a balance of mastery and inventiveness, which Picasso ingeniously employed.  He was imaginative towards traditional techniques and able to coax new and inventive methods to further his artistic intent in the area of creating original graphics. 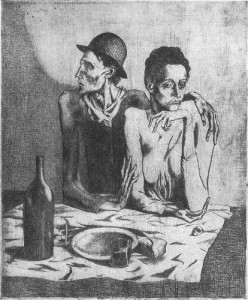 Picasso’s graphic oeuvre spans more than seven decades, from 1899 to 1972.  His published prints total approximately 2,000 different images “pulled” from plates of metal, stone, wood, linoleum, and celluloid.  It is these original prints which are the primary focus of this Saper Galleries Picasso exhibition.

Note that Picasso prints are not necessary out-of-reach financially as he was very prolific and some of his graphics are from book editions which tend to be much less expensive than the very limited number of prints of some editions.  Between 1911 and 1971 Picasso published 163 art books containing his original prints.

The most expensive Picasso etching  sold at auction was on November 30, 2004 for $1.14 million.  That 1904 “Le Repas Frugal” was from the first suite of Picasso etchings which was published in 1913.  The earliest signed, original Picasso graphic in this Saper Galleries exhibition is “Femme Couchée” (woman reclining) which will sell for $27,500.   It was not long ago that “Le Repas Frugal”, created when the artist was 23 years old, also sold for around $20,000.

The beautiful of the original graphics in this exhibition is that they present an autobiographical sketch of Picasso’s life, particularly with respect to the women of his lifewho are depicted in the collection.

Additionally, Picasso’s prints demonstrate his intuitive and characteristic ability to recognize and exploit the possibilities inherent in any medium in which he chose to work.  Once he had mastered the traditional methods of creating a particular print medium (such as etching from a flat metal plate), Picasso usually experimented further, pursuing new directions and scarcely known techniques such as “sugar-lift aquatint”.

In this exhibition, there is a clearly defined succession of periods in which certain techniques predominated.

When Picasso moved to Paris in 1904 he experimented with more traditional etching, adding the techniques of drypoint and aquatint to the copper plates.  He later bought his own press (instead of working in the Parisian ateliers) so he could experiment on his own, making numerous trial proofs and developing new techniques in the production of graphics. 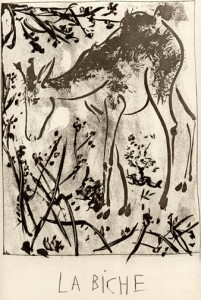 La Biche, a sugarlift aquatint and drypoint created by Picasso

Between 1919 and 1930 Picasso worked more in lithography.  In the 1930s he returned to etching, then creating the 100-image Vollard Suite and the etchings to illustrate Buffon’sHistoire Naturelle suite.  Following World War II many of his compositions were intended  as book illustrations.   In the Vollard Suite the etchings offer insight into both Picasso’s often tempestuous love life as well as his working style in the studio.   In a neoclassical style he demonstrated the incredible fluidity of his imagery and ongoing interest in Cubism.

Picasso was extremely productive by every measure.   At times, he would have an impulse that would develop into a frenzy of work, as happened in the last week of January, 1934 when he created 11 of the Vollard Suite etchings.  In 1957 he created 26 aquatints for hisTauromaquia suite in a matter of hours.

The first linoleum block prints (or linocuts) were first carved by Picasso in 1939.   The linocuts are a relief method of carving and printing similar to a woodcut but using linoleum instead of a wood surface.  By 1951, when Picasso was 70 years old, he renewed his interest in the art of linocuts and continued working on them for another 20 years. 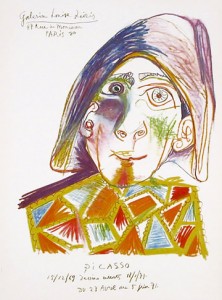 Clown for Leiris, lithograph by Picasso

Also by 1951 he had produced some 300 etchings, about the number Rembrandt had created in his lifetime.  And Picasso had just started!

Picasso’s achievement in various intaglio media had been extraordinary and could assure his pre-eminence in the history of printmaking.

In 1945 Picasso’s greatest lithographic work was in the atelier of Fernand Mourlot.  His growing mastery of the medium and his inventive genius soon enabled him to venture into domains new to lithography and to achieve bold and striking effects.  Several of the Mourlot lithographs are in this Saper Galleries exhibition.

After World War II Picasso’s production as a printmaker substantially increased and the etching and engraving continued to be his favorite medium for graphic expression.  The source of inspiration for his graphic work in the 1940s and 1950s were painter and writer Françoise Gilot and Jacqueline Roque (who became his second wife in 1961).

In his 80s Picasso actively resumed etching and engraving.  In his last decade about 500 different images were made using that medium, a testimony to his energy, and prolific output and continued creativity and inspiration.

Picasso has astonished the ablest printmakers again and again.  It is not only that he mastered the difficulties of new techniques with playful ease; he soon went on to obtain results that had been deemed impossible before his successes.

A virtuoso craftsman in engraving, etching, lithography and linocut, Picasso explored their secrets with patience and love and elicits from each medium the very subtlest effects it is capable of yielding.  Picasso cared.  It is hardly surprising that five, 10 or even 30 states (or variances) were sometimes necessary before a masterpiece emerged from his hands.

Georges Bloch, who catalogued Picasso’s graphics observed, “Picasso is truly revealed by following the genesis of his work from one date to another.  All his phrases and styles, which we use as landmarks, are in reality only successive stages of a continuity that constitutes the phenomenon of Picasso.”

Picasso was a master of the line and a great draughtsman, as those who visit this exhibition will observe.  Picasso said, “The graphic arts are…my favorite medium.”

In this Saper Galleries exhibition, Picasso: Original Graphics and Ceramics, you are invited to see for yourself that level of creativity and genius that makes Picasso an innovator and master of the medium who will always be regarded as the 20th century’s foremost printmaker and perhaps the most legendary artist of all time.

It will be my pleasure to welcome you.