Hi my name is Kevin Nunn. I am a struggling Artist from Tennessee.
I have a daughter of 9 years and a 5 year old son. A shitzu named Jasper and two kitty cats named Tiny and Bubbles. I love all of them so much!

My first paintings were terrible but I kept trying. I’ve probably painted nearly 200 paintings which mostly reside in my garage awaiting a place in a museum! …

More Than Just Canvas and Paint

Scribbles on the walls. Drawings on dictionaries and storybooks. Paint between the fingernails. Ever since I was a child I have always been drawing. I didn’t think of it as much because it was just the way things are with me. It was the way I spoke my mind and my feelings, the way I could tell anyone my humble yet quite far-fetched stories. There were always the crayons that could create the landscapes, and the pencils that would magically put the characters in my stories brimming with life. It was, what I could think of at the time, the kind of magic that I could possibly have, even without the sparkles.

Grown up and still living with art, I have had so many struggles with this so-called artist life. The trials and errors, the wrong techniques, the inexperiences with mediums and color theories – there are so many things that have stumped me and left me stuck in a stage of non-progression. …

No Plan B for Natalie!

I’m a visual artist who works from my little cottage studio in the Pineywoods of East Texas. There has never been a career plan B, because I have only ever wanted to be an artist. This is not a hobby or a second job. I love what I do!

As a child I remember flipping through old art history books, and learning to distinguish between the visual language or style of each artist. I felt a particular connection with the old masters; and the classical style rooted in realism sparked in me an emotional response. Art came alive for me then, and began this lifelong love. …

The art is the development of my soul

I was graduated as a theater critic in 2005 at the National University of Theater and Cinematographic Art, Field: Dramatic Critics, Bucharest, Romania.
From 2006 till 2008 I have worked at the “Maria Filloti” Theater, in Braila, as theater critic and festival organizer.

I hold a diploma in Fine Arts in the field of painting and experience in byzantine painting as I was involved in different art projects for churches in Romania.
Currently I am living in Valencia, Venezuela.
I want to learn how to paint like the old masters and this great site is my best opportunity.

I studied art and graphic design 30 years ago before switching to medicine. It was actually the art that lead to a love for science and medicine. This began while researching images for an intaglio class. (These images can be seen on my site at rakedlight.com) I was so fascinated with the process of how cells and “living-connected-parts” worked, that eventually a career in science and medicine evolved.

I am now completing a full circle return to art which was initiated by my teaching anatomy & physiology at Arkansas State University.

Currently I am exploring materials and techniques in encaustic and cold wax, but it is my love for classic styles of drawing and painting that remain true after many years. … 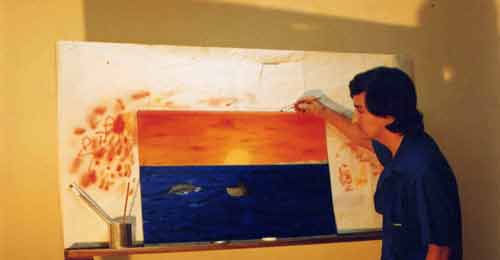 I was born to be an artist

I dedicate myself to art occasionally, but I want to learn everything I can and devote full time to it. I have over 15 years of doing oil paintings and art pastel’s; experimenting with mixed media such as watercolor and pastel technique (these can be viewed on my website deivet381.260mb.net)

I have no interest in copying any other artists, I have enough clear ideas to go my own way and develop my own style, as Pablo Picasso. …

My final season of Life

My name is Sarah. I am a mom of middle school age boys and my husband teaches math at and international school, I received a BFA in fine arts from Oregon State University way back in 1994. I am an American citizen, but presently I live in Kiev, Ukraine.

In University I found a natural inclination towards sculpture and 3D art so I focused on this while there and pursued skills in making bronze sculptures and works carved from stone. I loved it but found this sort of boundary work outside of school hard to keep on doing.

Drawing and painting have always been somewhat difficult for me, but now that I am about to be 50 years of age and I have done many interesting things with my life and am almost done raising three great boys I want to tackle the 2D arts of drawing and painting. …

I am from Kerala, widely known as ‘God’s own country’, a small state in India the land of diversity. Currently I work in Abu Dhabi, United Arab Emirates.

I am much fond of doing portraits in Oil Painting. I have never been trained under a teacher. I used to draw and paint (water color) from my childhood on wards but never got a chance to join an Art School. Later when I was able to pay myself, I tried to join a teacher to train me the technical parts of Art but he asked me to see some of my paintings and when he saw those he refused to join me there saying there is nothing he need to teach me more instead to go on practice and I can achieve more success. …

There was only ever one thing I was good at school at. Yes, you guessed it, art. I had an eye for it and enjoyed it and felt pride in it when nothing else offered me pride. However my family, my father in particular, who was also a great natural drawer wouldn’t let me take the option at school when that time came around, claiming there were no jobs in it somewhat bitterly.

The middle of my life has been a selection of half hearted jobs, that haven’t even been that good at paying the bills, hey but at least I had a job right …

I always wanted to be an artist

My name is Irina. I am studying at Arts University Bournemouth, but I graduated from the technological university in a small Siberian town, in Russia.
I also have Asian roots, because my homeland, Buryatia republic has own traditions similar to Mongolian culture…

I always wanted to be an artist and spent many days in the local library reading books about Van Goth, Rembrandt and da Vinci. Fortunately I found the opportunity to work at one fine art gallery in Moscow and worked with oil, acrylic and digital painting, so, it increased my interest to art and gave the opportunity to exhibit some of my works in Moscow and Taiwan.

Now I am using mostly digital painting during my studies, but I want to return to oil a…